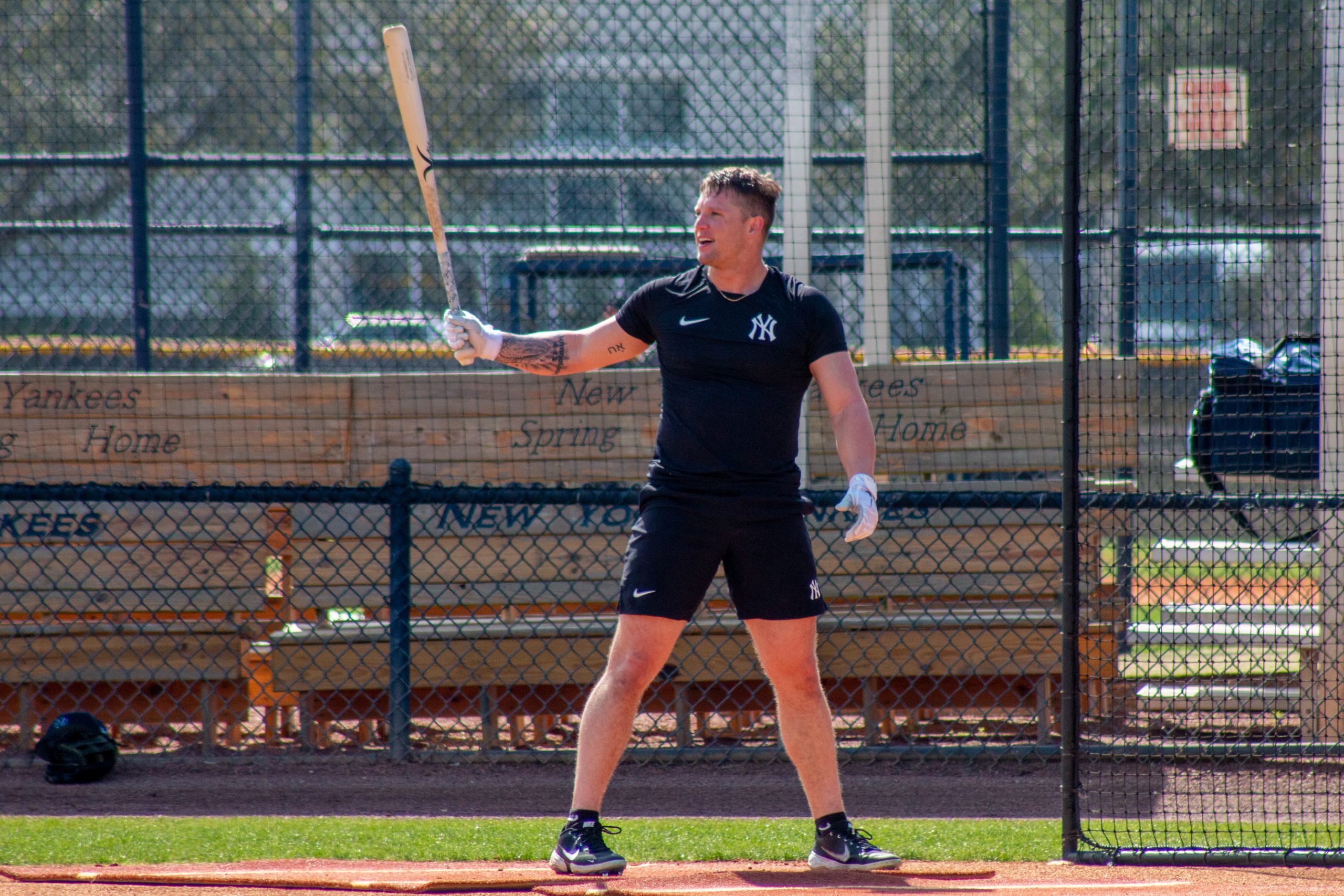 Friday’s mini-camp was an abbreviated affair, consisting of about an hour of batting practice with only 7 batters. Jasson Dominguez, Elijah Dunham and Ryder Green were on Field 1, while Cooper Bowman, James Nelson, Pablo Olivares and Matt Pita were on Field 2. 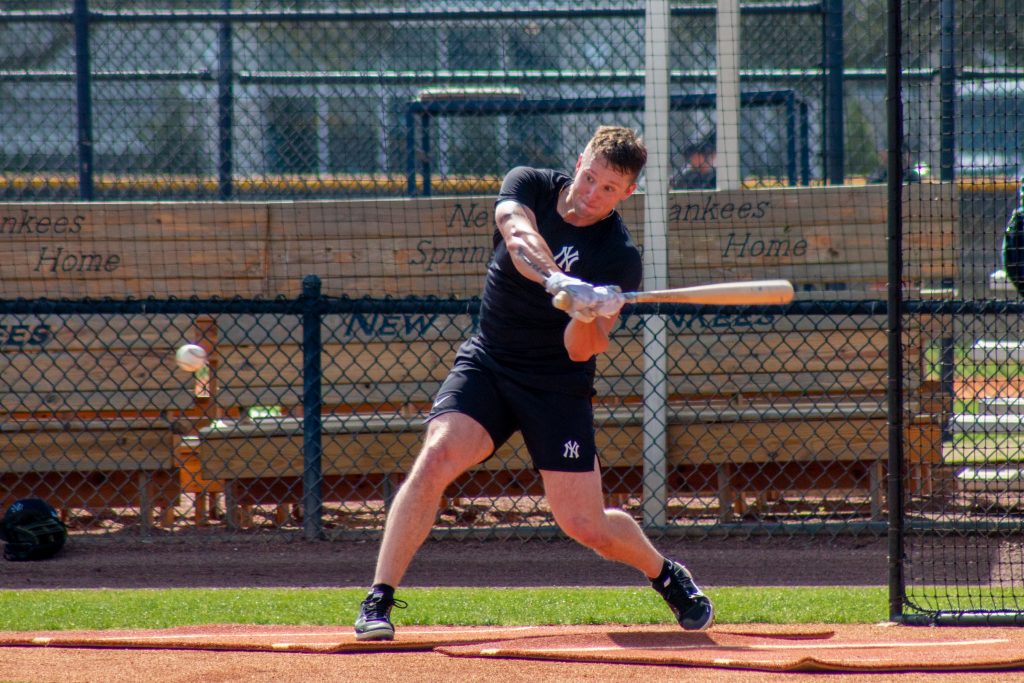 The most impressive bunch was definitely on Field 1. Elijah Dunham gained quite a bit of upper-body muscle since I last saw him in Low-A Tampa in June 2021. Dunham consistently hit rockets to all areas of the field. Dunham has easily made the biggest strides in improving power year-over-year. In Dunham’s debut year of 2021, he batted .257 with a .825 OPS, hitting 13 HR on 89 H in 93 games with Low-A Tampa and High-A Hudson Valley. I can only imagine that would improve this upcoming season in (presumably) AA Somerset. 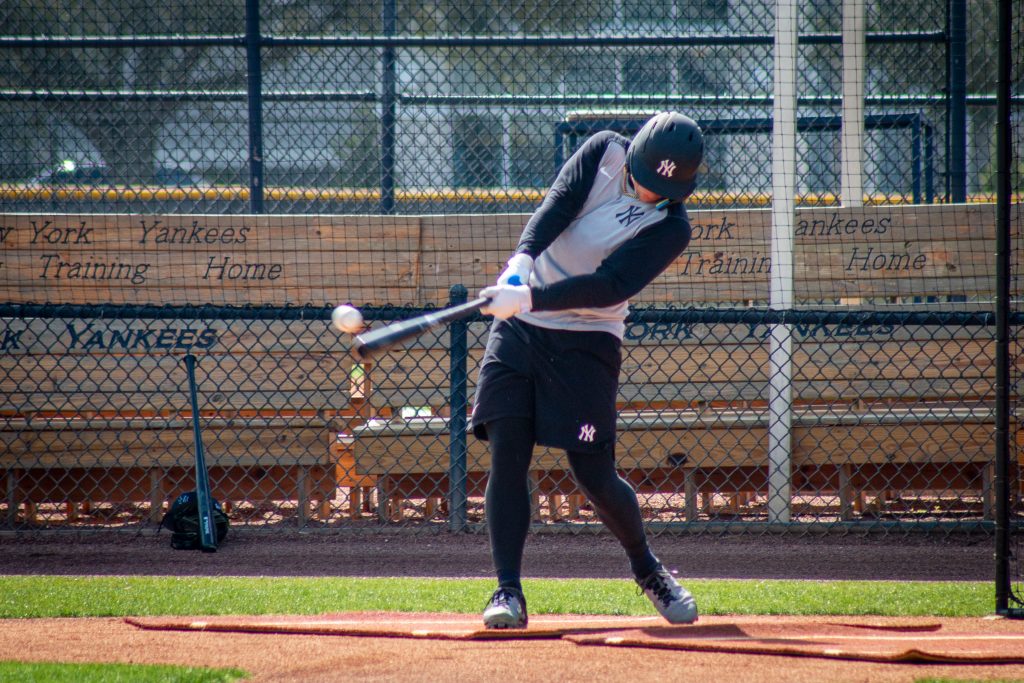 Ryder Green also impressed with the first time I had seen him attempt to bat lefty. Green is officially listed as a right-handed batter and looked like he was as comfortable on the left side as he is on the right side. Green had a little bit of an underwhelming 2021, batting .235 with a .761 OPS, hitting 6 HR on 40 H in 50 games with Rookie-level FCL Yankees and Low-A Tampa. Green looks a lot more comfortable on the field this year compared to what I saw in 2021, which hopefully should pay dividends wherever he starts his 2022 season, either in Low-A Tampa or High-A Hudson Valley. 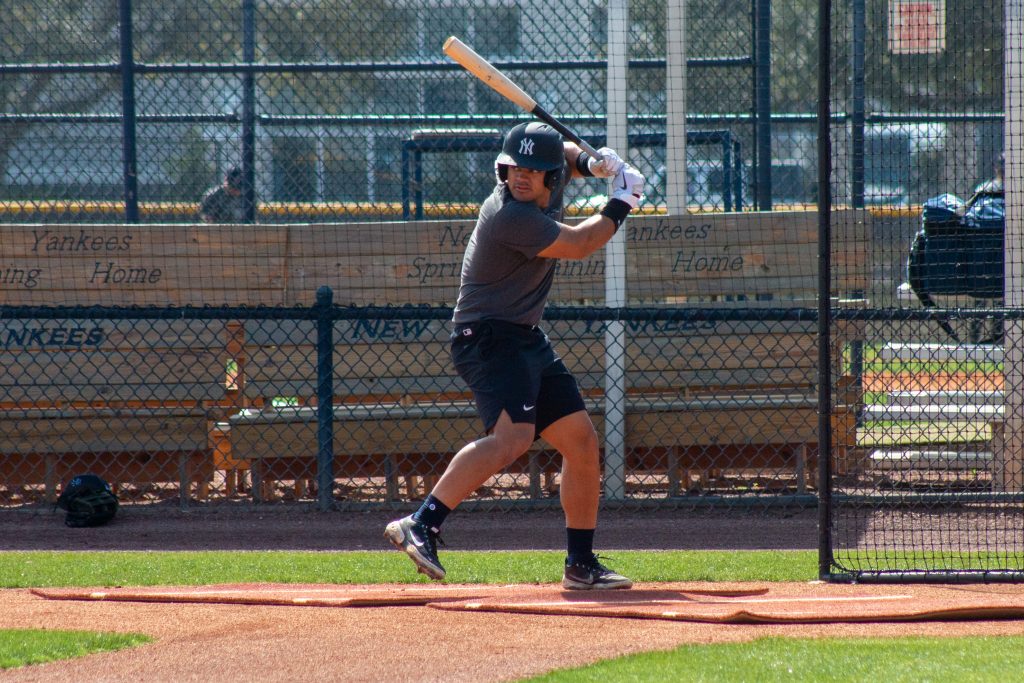 Jasson Dominguez struggled a bit on both sides of the plate Friday. The Martian got a hold of a few baseballs and gave them a ride, but that was rather far and few between. Dominguez looked like his timing was off and wasn’t consistently hitting the ball square, either creating pop-ups or dribblers. Dominguez has looked more comfortable batting lefty versus righty the few months that I saw him perform in 2021, but Friday just looked like a frustrating day for him overall. In Dominguez’s debut year of 2021, he batted .252 with a .732 OPS, hitting 5 HR on 52 H in 56 games with Rookie-level FCL Yankees and Low-A Tampa. I expect Dominguez to start in Low-A Tampa to get him a little more experience to live pitching, but he should quickly get promoted to High-A Hudson Valley.

On Field 2, the batters collectively struggled a lot more than those on Field 1. I’m not sure if they were working on different things, but there were a lot more whiffs and dribblers on Field 2 versus the bombs and laser line drives on Field 1. 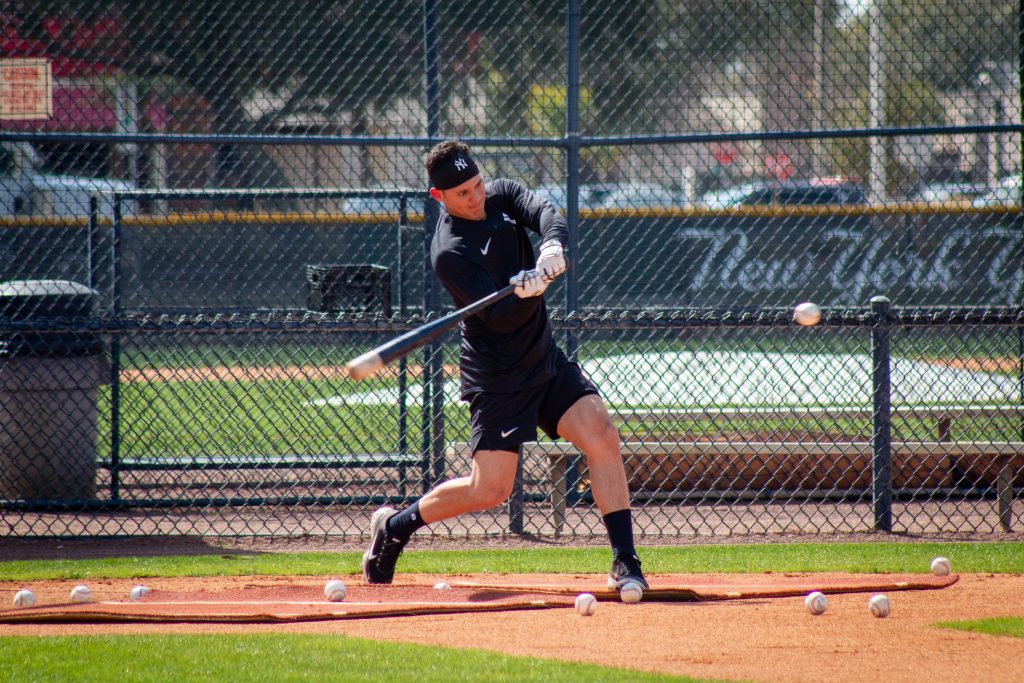 Pablo Olivares made the most solid contact on Friday of those on Field 2, and took a few baseballs for a ride into the outfield. Olivares hit a few pop-ups but overall hit the ball much more square than his teammates on Field 2. Olivares batted .244 with a .700 OPS, hitting 2 HR on 47 H in 58 games with High-A Hudson Valley. 2022 may prove to be a definitive year for Olivares given the logjam in the outfield. 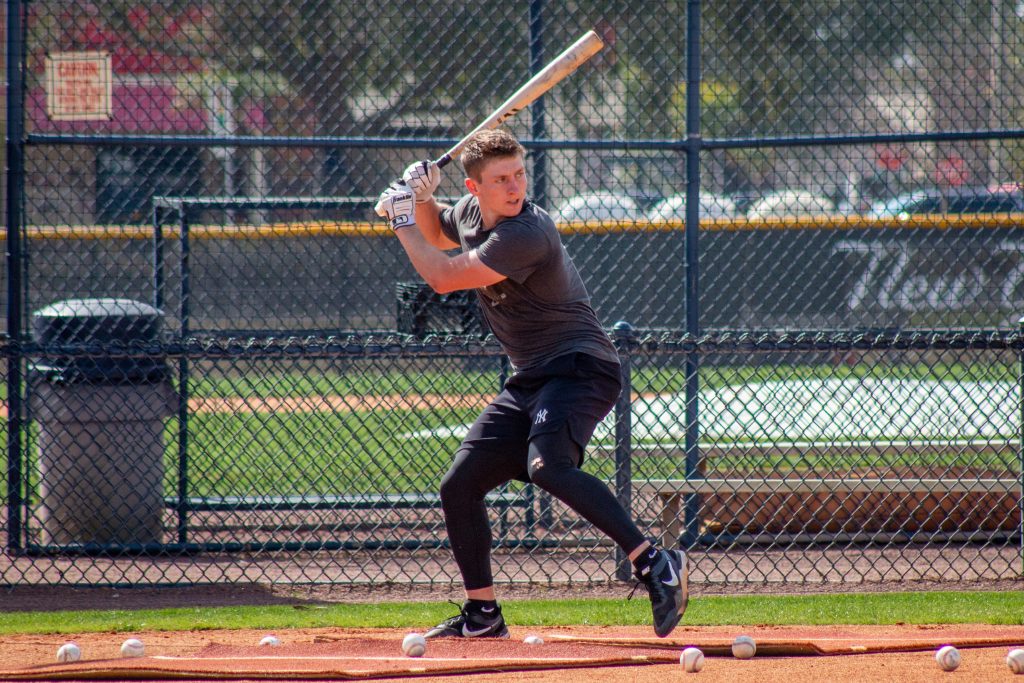 Cooper Bowman also looked pretty good at bat on Friday once he got into a groove, but started out with hitting a lot of pop-ups. Bowman tends to create a lot of spin with the balls he hits, which sometimes works to his benefit where in the event there’s a poorly hit ball, the spin would sometimes create lift. Bowman hit a few balls not entirely square, but were still lifted into the outfield. Bowman made his pro debut this past June, shortly after being selected by the Yankees as the 4th round pick in the 2021 Draft. The South Dakota native batted .255 with a .835 OPS, hitting 4 HR on 26 H in 30 games with Rookie-level FCL Yankees and Low-A Tampa. 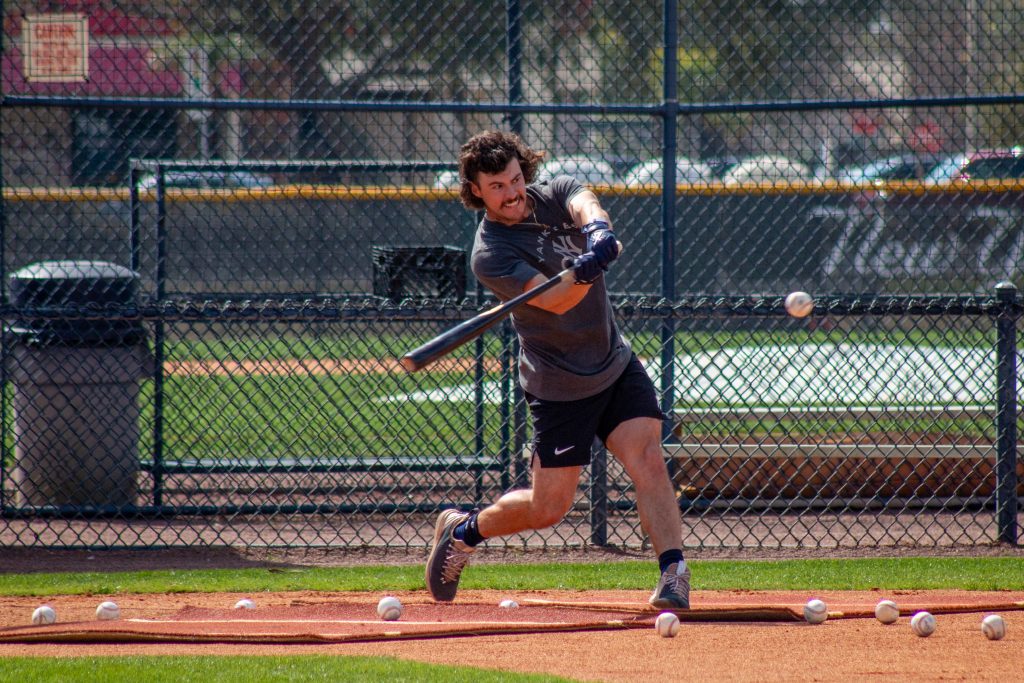 Matt Pita hasn’t been a top performer offensively speaking, but in his pro career with the Yankees (debuted in 2018) he’s been a consistent .200-.230 BA performer. Pita last played with AAA Scranton/Wilkes-Barre in 2021, and looked decent on Friday at the plate, but again, not as outstanding as the players on the opposite field. Pita hit a few balls into the shallow part of the outfield on Friday, but mostly hit soft grounders or pop-ups as a result of not hitting the ball square. The local product (Valrico, FL native) batted .227 with an OPS of .733, hitting 8 HR on 41 H in 60 games between AA Somerset and AAA Scranton/Wilkes-Barre. Pita performed better in AAA than AA, with a .826 OPS in AAA and .661 OPS in AA in 2021. 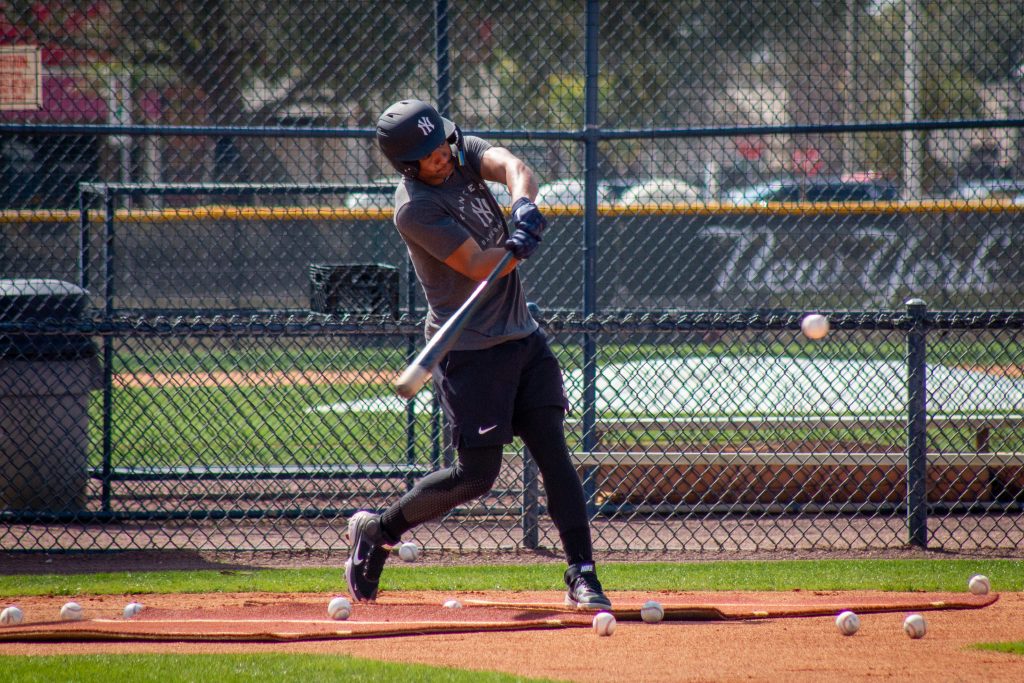 James Nelson didn’t perform that well on Friday, with a lot of pop-ups and swing and misses. That seems to be on par with his statistical performance with High-A Hudson Valley in 2021. Nelson batted .246 with a .678 OPS, hitting 6 HR on 68 H in 77 games with the Renegades. Nelson has a career batting average of .256 since being drafted by the Marlins in 2016.