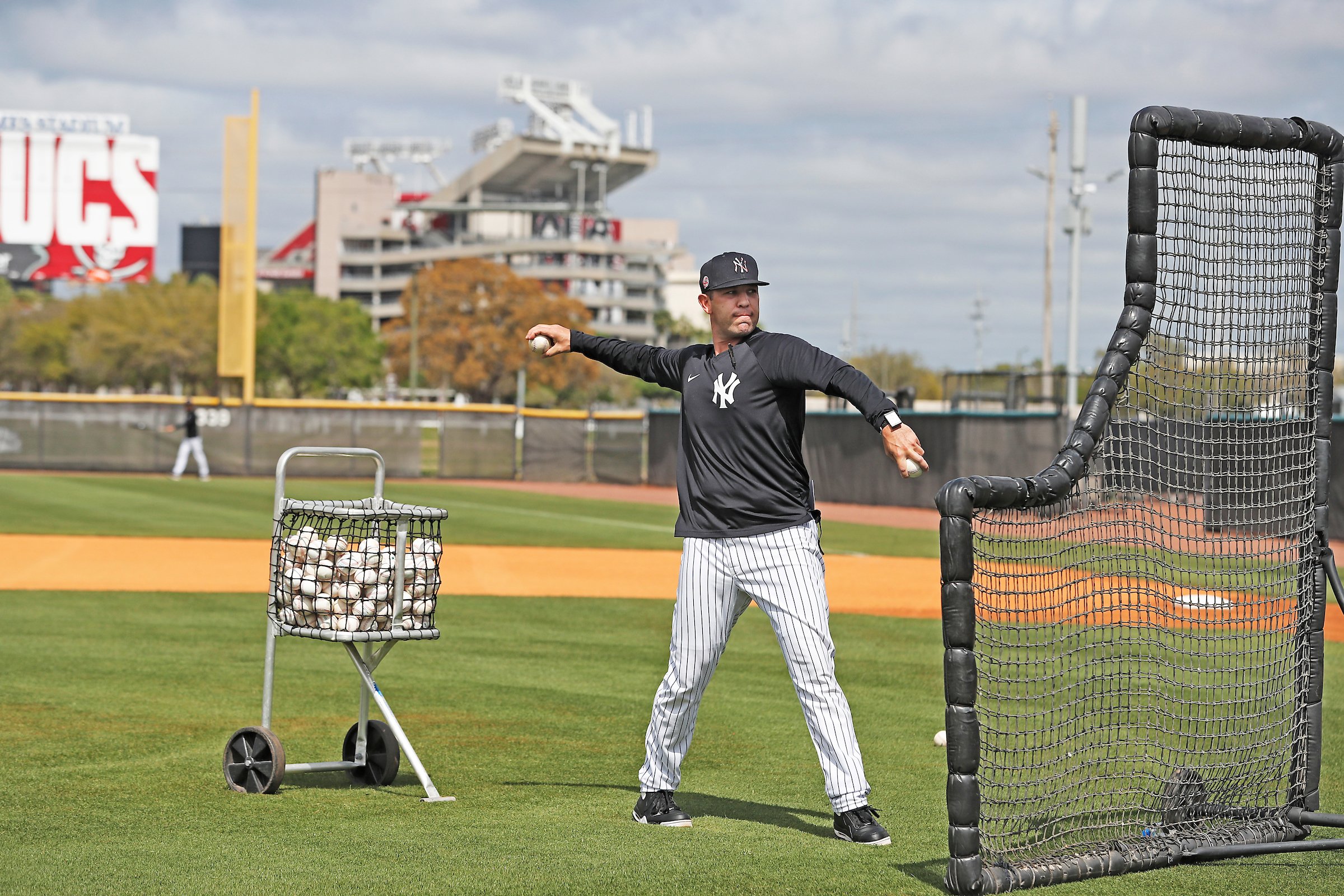 Dillon Lawson was recently named the New York Yankees’ hitting coach after heading their farm system since 2018. Lawson met with the media on Wednesday and addressed a number of topics including the “Hit Strikes Hard” mantra used in the Yankees farm system and the Tampa Tarpons new manager, Rachel Balkovec.

Lawson can be noted for being a reason of a number of hires within the New York Yankees farm system, including Balkovec and Tampa’s hitting coach, Kevin Martir.

When Lawson was asked by NJ.com’s Brendan Kuty about what “Hit Strikes Hard” means, Lawson said, “We chose that because we feel that it’s accurate to what really good baseball players do, but it’s also really easy for players to remember. If people from other organizations or their buddies or an old coach were to ask ‘what do the Yankees believe in?’, we wanted them to have an answer: hit strikes hard. They believe in hitting strikes hard.”

“When we swing, we want to swing at strikes. When we swing at strikes, we’re more likely to make more contact. When we make more contact, we’re more likely to hit the ball harder. When we make hard contact, if we can, we would like to hit it over the infield. Sometimes we’d like to hit it over the outfield, over the outfield fence, all of that works. But that would be the next layer to “hit strikes hard”.

On the lost minor league season of 2020

Noteworthy within the interview was when WFAN’s Sweeny Murty asked about the effects were when Lawson worked with minor league players during the lost season of 2020 and the difficulties that were imposed by the lack of in-person access to players.

Lawson first spoke highly of the quality of minor league players being brought into the organization and their work ethic in the shutdown of the minor league season in 2020, saying, “I think a lot of it goes back to the people that brought these players into the organization, first and foremost. Our scouting department… I’ve been amazed at just the quality of people that we are choosing to bring in, the people that, whether it’s we’re acquiring through the International market or trade or through the amateur draft, the quality of person has been off the charts.

“So when you’re dealing with somebody like that who now has to go off on their own, and still find ways to be… to improve and to develop that work ethic, the diligence, the persistence, in their own organization, their ability to organize and manage their own time becomes extremely important.

“So we were actually able to leverage those personalities, those character traits and what we did was we just deployed coaches. All coaches had… they were assigned players. And ‘hey, let’s stay in touch with these guys. Let’s get them… if we can help get them equipment,’ or if we can… however we could help, we were trying to help within the rules.

“So a big part of that was sitting down and taking things from our Strength and Conditioning, or Performance Science in a way that a lot of other areas… pitching as well, there’s a way that they script out a full year of development. That hasn’t necessarily… I think organizations have more of that now, but that hasn’t been a traditional thing, necessarily. Like a strict manner, like a pitcher would go through a throwing program and then build up in bullpens and things like that, we just didn’t have that on the offensive side.

“So we took everything that we knew and we were able to organize however many months. We would try to go off of however many months in advance and then we’d get to a point and we’d still be on the shut-down and then we’d plan out another couple of months and then, you know, players would have vacations or a family event, or maybe they got sick and you’d make adjustments to all this stuff.

“That constant contact, and it goes back to the players being who they are and being great individuals, they were staying in contact with us. They were allowing us to be able to do a good job, so none of that would’ve happened without them.”

Lawson also discussed how much of a positive impact Rachel Balkovec has had on the minor leagues, saying, “Leadership isn’t just about the right things, it’s about actually galvanizing people in getting them to move in the same direction and accomplish things. That’s what she’s good at. She’s good at true leadership, not just preaching, or commanding or dictating, she’s great at leading.

“And so, she’s been in a position before to do that from a strength coach title, and then she was given a hitting coach title and she was still able to lead and be productive and accomplish significant things from that position and now she has this managerial title. But her skillset, given what it is, it plays regardless of what the title is.”

Lawson also spoke about former AAA Scranton/Wilkes-Barre’s hitting coach Casey Dykes getting promoted to assistant hitting coach for the Yankees, saying, “If you just look at his track record, just specifically from a coaching standpoint, he coached at VMI (Virginia Military Institute), was one of his stops, and that’s a really difficult place to recruit, to convince people to come and be a part of that institution, and yet he had Top-25 recruiting classes.”

“But on top of that, if you look at the production on the field, I don’t know if it was 3 out of the 4, or 4 out of the 5, they were top 10 or 15 in home runs hit. He goes to Indiana as the hitting coach there, and in a single year they’re top 10 in home runs hit. So you’re just following this… you know, you hear great things about his personality and you’re just following this… the work that puts forth and executed on and, again it’s just… it’s a no brainer. ‘We’ve got to get this guy in.’ So we were really excited for the person we were getting and he just blew our expectations out of the water.

“We did not have any hesitations or questions to have him in AAA this past year. His ability to connect with players, to… not just say the same thing in a bunch of different ways, but to find ways, individual ways to connect with this player who might be dramatically different from that player, but still be able to get everyone on the same page, moving in the same direction for the betterment of themselves and the organization.

“Having him, not only someone of that quality on staff with us, that’s a big plus, but it’s also huge for the fact that I can trust him. And he knows if I just say, ‘hey I need you to go do this.’ There are no questions, there’s no ‘I wonder how this is going to work out’. I know exactly how it’s going to work out. I know exactly how he’s going to say it or how he’s gonna do it or how it’s gonna look and what the end result’s gonna to be like, and that’s very comforting for me.”

To end the interview, Lawson was quoted in saying, “I knew that I always wanted to coach. I hadn’t really considered being the coach of the New York Yankees, the greatest sports franchise on Earth.”