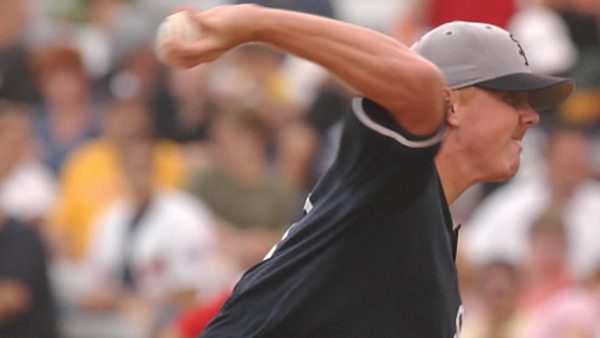 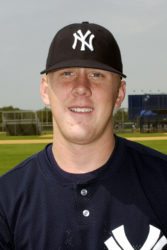 Before he spent his Sundays under center as a quarterback for the Cleveland Browns and the Dallas Cowboys, Brandon Weeden‘s career path initially took him to the pitcher’s mound after being selected as a second round draft pick by the New York Yankees in 2002. Weeden, who attended the same high school as future Yankees prospect Ty Hensley in Edmond, Oklahoma starred in both football and baseball and gained particular notice as a hard throwing reliever out of the Edmond Santa Fe High School bullpen.

By his senior year, Weeden began to attract the attention of major league scouts, who became impressed with his quick conversion from a shortstop to a hard throwing reliever who fanned 68 batters with nine saves as the team’s closer. Weeden also prospered on the gridiron as a quarterback and earned All-State honors in both football and baseball. “Baseball was always my passion. I was always a little bit better at baseball,” Weeden said. “I was a little bit more advanced than most of the guys. I knew it was going to be my path at the collegiate level and at the professional level and I was fortunate enough to be drafted in the second round by the Yankees.”

The Yankees offered Weeden a $565,000 signing bonus as a second round selection to sway him from Oklahoma State and a potential football career, believing in his raw potential. Though many in retrospect compared him to fellow Yankees prospect Drew Henson, Weeden did not come attached with the hype and expectations of a two-sport athlete. “This is not like Drew Henson where we had to overpay because he was such a hot football prospect,” former Yankees VP of Player Development Mark Newman said, (New York Post). 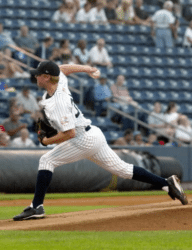 Viewed as a possible upside pick, Weeden succeeded from the start in his professional season in 2003 with the Gulf Coast Yankees, going 2-2 with a 1.73 ERA in seven appearances. Weeden’s strong start in the Gulf Coast league ultimately became the peak of the baseball career. Earning a late season promotion to the short-season Staten Island, Weeden was unable to generate much velocity off an average 89-92 four-seam fastball and got hit hard, pitching to a 6.05 ERA in five starts in the New York-Penn League. “I remember the night before I had been called up, they (Staten island Yankees) had a bench clearing brawl with Brooklyn,” Weeden reflects. “I started my first game there and the guy on third base stole home, which I never experienced before. The atmosphere playing in Staten Island was probably my best experience. One of the best I had when I was playing.”

Still considered a project compared to other pitchers in the system, the Yankees decided to maximize his value and included him as a trade chip that winter to the Los Angeles Dodgers with Jeff Weaver for former All-Star pitcher Kevin Brown. “I was shocked, honestly,” Weeden said. “I was watching the 10 o’clock SportsCenter and saw on the bottom ticker that Kevin Brown was traded and toward the end of it I saw my name and I called my agent.” Weeden would pitch three more minor league seasons and never achieved the same level of dominance he had in the Yankees system, where he held opponents to a .188 batting average. A torn labrum and tendonitis in his throwing shoulder ended his baseball career by 2006 after a 19-26 overall record and 5.02 ERA, in five professional seasons without advancing past Single-A.

Weeden today is best known as a journeyman NFL quarterback with the Cleveland Browns, Dallas Cowboys, and Houston Texans. After being taken in the first round as a 28-year-old by the Browns in 2012, Weeden became the oldest first round draft pick in NFL history. His late start at Oklahoma State, coupled with his earlier baseball career makes Weeden’s path an unorthodox one where he must silence critics on a routine basis and look to earn respect under center. “I never really stopped throwing the football even when I was playing baseball,” Weeden explains. “I always picked up a football before I even picked up a baseball just to keep my arm in sharp. Throwing a football was a natural thing. The thing I needed to work on was reading defenses, which took me about a year to get used to doing again.”

Though his professional baseball career with the Yankees might be a small footnote on a resume littered with achievements and accolades, Weeden might be one of the biggest names to come out of the system in the past 15 years during a time where raw upside and potential were the foundations of player development.