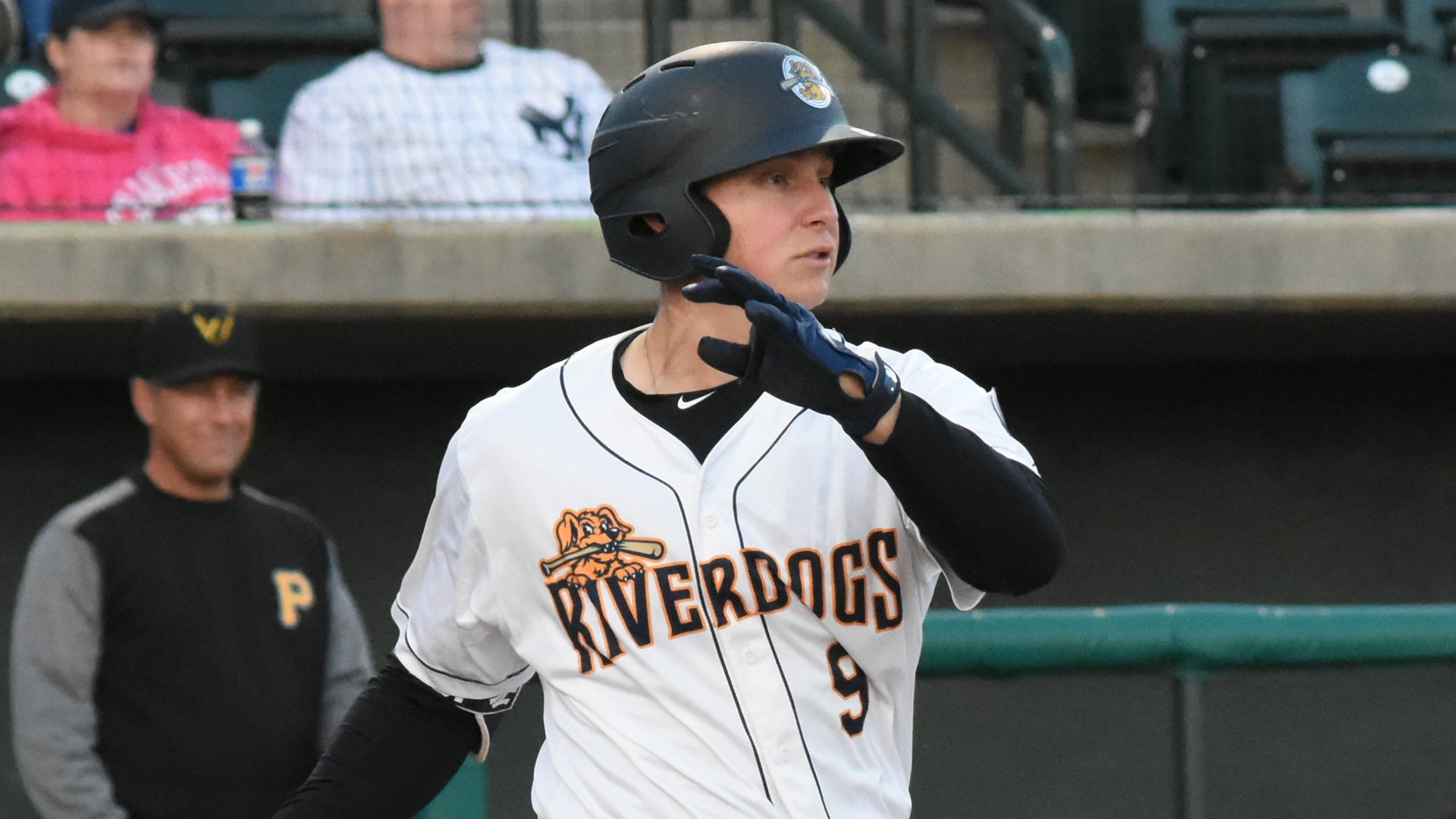 Dalton Blaser may have a career waiting for him for when his baseball days are over. “I kind of have a hidden talent. I kind have a really good broadcasting voice. I hope one day when my playing days are over that I can be a broadcaster. Maybe Yankee Stadium in 13 or 14 years when I’m done playing!” Blaser said. “I was always that guy that if there were a microphone around, I would start announcing and people would start laughing. They would say like, ‘Man, that was pretty good!’ and I’m like hey, I may have some work here!”

Blaser’s focus at the moment though is on baseball. In his third year in the New York Yankees system, Blaser found himself in Charleston playing first base and outfield for RiverDogs in the Class-A South Atlantic League. His baseball journey has presented different twists and turns before landing with the Yankees. 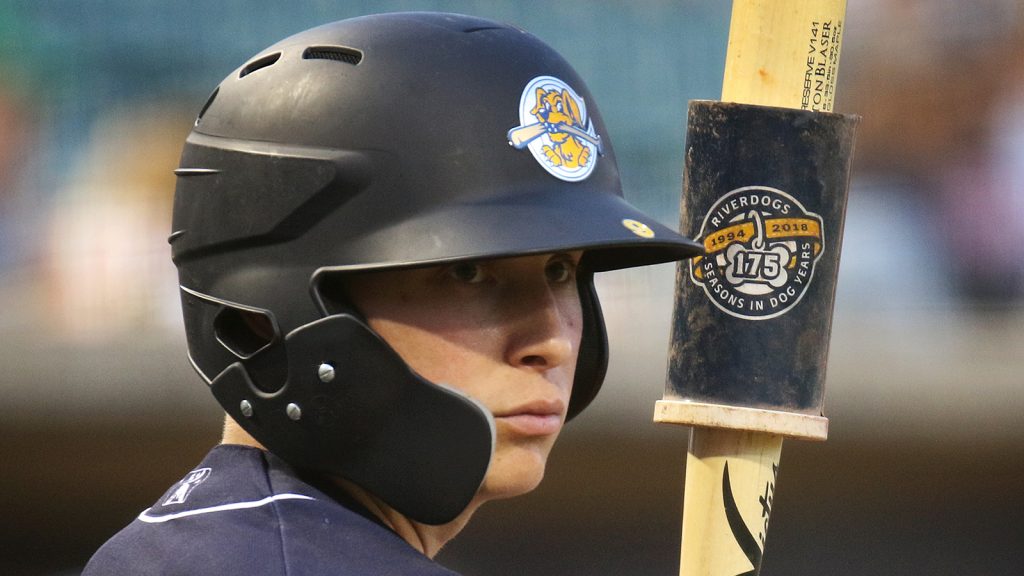 Blaser grew up in Roseville, CA playing baseball from the start. His father, Mark, played six years of minor league baseball, five of which with the Yankees where he reached the Double-A level. Blaser relished his father’s guidance growing up. “He had good pointers. I always tell everyone that it’s a blessing and a benefit to having somebody who has been through the process. Somebody who has been through the ups and downs of baseball.” Dalton said of his father.

It wasn’t just his father that provided guidance. During Mark’s journey, his mother, Anita, was with him the entire way. “She did it with my dad. They dated for a while when he was playing. They’re still together to this day. She was with him during the times, the ups and downs of when he’d go 0-for, and he’s upset. It’s kind of funny talking to her. They’ve been super helpful and supportive,” Blaser said. “She remembered the long travel days and not getting to talk to him much. She’s helpful. She thinks of the game in the simple forms. My dad and I are talking about hands and hips and this and that and fielding the ball. My mom says, ‘why don’t you just hit it and why don’t you just catch it?’ It’s kind of funny; sometimes we get too crazy. It’s nice to have her around for sure.” 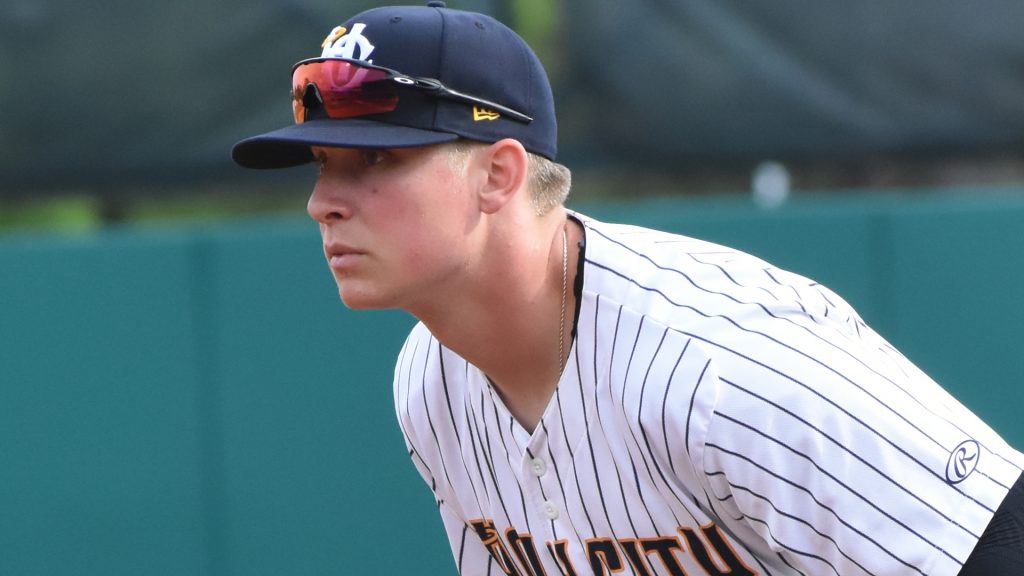 With their guidance, Blaser had a stellar high school career that culminated with the Oakland Athletics drafting him in the 39th Round of the 2012 MLB June Amateur Draft. Blaser decided to get his education rather than sign and start his professional career. “I was drafted out of high school first by the Athletics. I wanted to get my degree, so I went to a junior college. I had some offers from a couple of D-1’s, but there were a lot of walk-ons, so I decided to go to Sierra Junior College, a couple of good coaches there I wanted to play under and get a chance to play with my brother (Nick) so I went to junior college, played a couple of years there and then I went to Cal-State Fullerton.”

In his senior year at Cal-State Fullerton, Blaser slashed .359/.439/.485 with four home runs and 38 runs batted in. That performance caught the eyes of big league scouts in advance of the 2016 MLB June Amateur Draft. “There were a couple of other teams. I didn’t even know the Yankees were in, to be honest. They just kind of flew under the radar, that’s what they usually do and what I love. There were flying under the radar and then come draft day, they called me up, and I was a Yankee so I couldn’t be any happier,” Blaser said. “I was with my uncle Mike, my dad, my friends, my grandpa, it was incredible. We were all watching the TV when we heard my name called. It was a fun experience. I was so excited because my dad played with the Yankees and to be drafted by the Yankees was incredible.”

The Yankees selected Blaser in the eighth round and assigned him to the Staten Island Yankees of the Short-season A New York-Penn League. In his first professional season, he slashed .223/.316/.287 with two home runs and 21 runs batted in 55 games. He would start 2017 in Staten Island again and earn a promotion to the Charleston RiverDogs of the Low-Class A South Atlantic League. In 31 games at Charleston, Blaser would slash .277/.354/.455 with three home runs and nine runs batted in.

Blaser once again finds himself in Charleston playing first base and outfield for the RiverDogs. As far as the transition to professional baseball, Blaser wasn’t focused on the physical part of the challenge, but the mental aspect. “It was tough but not in the areas that a lot of people would think It would. It’s tough just playing day in and day out. It’s a lot of fun though. So every day, it was fun, it was just tough finding out how what it means to be a pro every day. Getting up, doing your routine, going to work every day. Going 0-for-4 the night before. You gotta come back today and go 3-for-4. It’s been a grind, but it’s so fun. I’m learning each every out I play,” Blaser said. “I don’t try to get too serious, too high, ups and downs. I try to stay with my daily reminders. I do some meditation stuff, some positive energy things.” 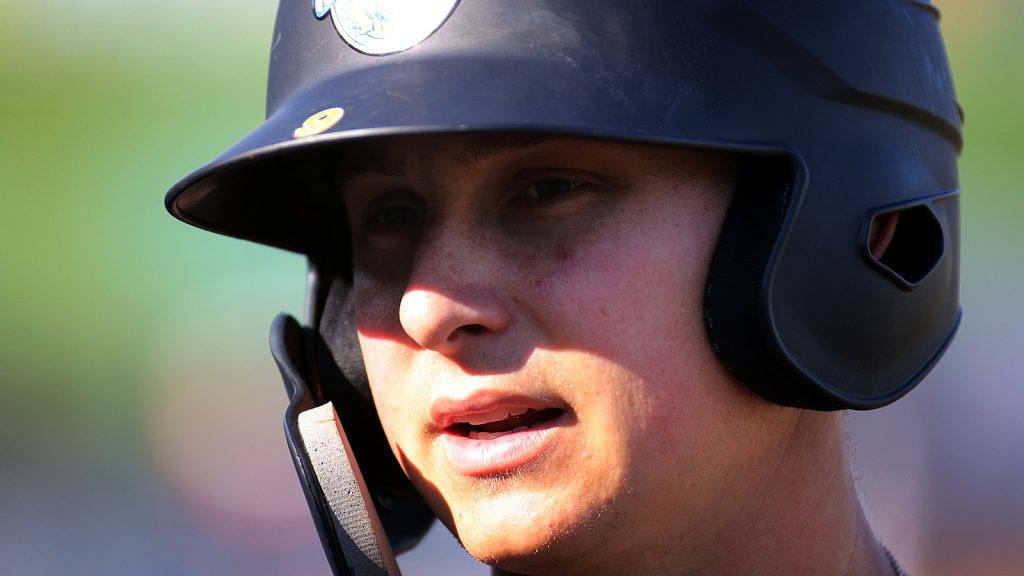 Charleston RiverDogs Dalton Blaser against the Lakewood BlueClaws in Lakewood, NJ on Thursday, May 10, 2018. (Photo by Martin Griff)

Blaser is off to a slow start so far this season. Through 38 games, Blaser has slashed just .193/.288/.269 with two home runs. According to his manager, Julio Mosquera, Blaser’s turnaround is right around the corner. “He started a little slow. If you look at his stats in the last week and a half, he’s been attacking the ball a lot better. He’s been getting hard hits which is some stuff we look at. He’s making great contact at the plate, and the hits are going to start falling for him. In the last couple of games, he’s had hits here and there, and I think it’s good for him because he’s still not giving his at-bats at him. You know, he’s a professional. He’s going to go out there and try to get better in everything that he does at the plate. You can see the improvement in his swing, and I like where he’s at right now,” Mosquera said. 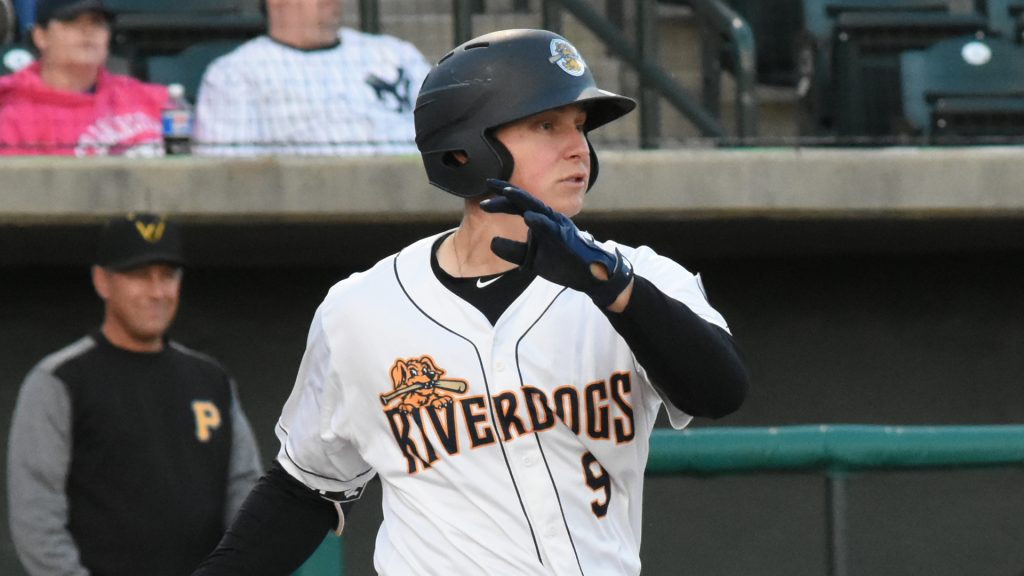 Defensively, his manager once again was effusive with his praise. “He’s a tremendous first baseman. He helped us a lot at first base,” Mosquera said. Blaser has been playing mostly first base this year after splitting time between first base and outfield last year.

Blaser hasn’t rested on his laurels though. He’s still working to perfect his craft at first. “Good first steps defensively at first base. I told my coaches this year that I want to come and win a gold glove. I don’t want to come in and be a solid defensive first baseman. I’ve been working on good first steps and keeping my eyes behind the ball. It’s been fun. I’ve been doing this during spring training and before at home and continue to be better. Every year I want to grow as a player and come in and do something new every year,” Blaser said.

Blaser counts on his teammates to get through the long grind of a 140 game season. “I have a lot of friends through all of our teams, Scranton, Trenton, Tampa, here and even lower I have friends all over the place which helps because you come in comfortable with a bunch of different guys. It’s fun, I enjoy all of these guys, and I have fun with them. You have to be around them for eight months out of the year, so you better enjoy!”

In this article:Charleston RiverDogs, Dalton Blaser