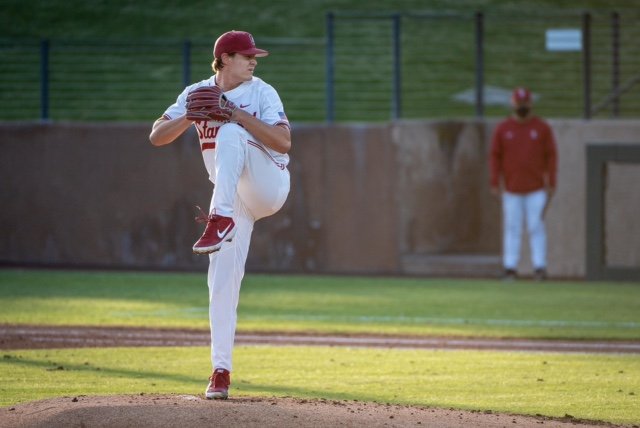 Brendan Beck was drafted by the Yankees in the second round on Tuesday. Photo provided by Stanford Athletics.

Beck is a 22-year-old right-hander who fared well against Pac-12 competition. This season, he went 9-3 with a 3.15 ERA in 17 appearances (15 starts). He struck out 143 batters while walking just 26 over the course of 108.2 innings pitched as he helped the Cardinal get to Omaha and the College World Series this year.

MLB Pipeline has Beck listed as the 99th best prospect in the class, which may make the pick a little bit higher than some thought, but he does have the tools to be a successful pitcher. Here is some of what they had to say about him:

“Beck is more about his feel for pitching than an eye-popping repertoire, though his stuff was ticking upwards a bit in 2021. His fastball is now more of an average offering, sitting comfortably at 91 mph, and he’s shown the ability to reach back and get 93 mph when he needs it. The rest of his stuff, a distinct curve and slider, as well as a changeup, all grade out as average offerings.”

Here is some video of Beck courtesy of The Prospect Pipeline:

The fact that Beck has four pitches in his arsenal is a good sign because the Yankees can work on developing his pitches rather than teaching him how to throw a different pitch. The Yankees do have familiarity with Beck because they drafted his older brother, Tristan, in the 29th Round back in 2017. Tristan chose to go to Stanford and was selected by the Braves n the 4th Round last year.

It is no surprise that the Yankees elected to go with pitching with this pick as Beck could slide into the Low-A rotation next year if the organization decides to shut him down for the rest of the year due to the innings jump in 2021. He does not have one dominant pitch, but having the ability to throw multiple pitches for strikes consistently is never a bad tool to have.

Outside of Tristan Beck, this is the first time the Yankees have drafted a Stanford player since 2014, but after taking two Pac-12 players last year, the Yankees stayed out west with their first pitch today.