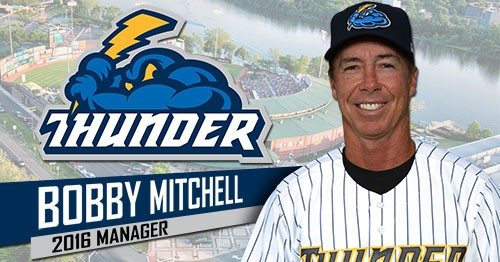 The New York Yankees announced that former Major League outfielder Bobby Mitchell will manage the Thunder for the 2016 season.

A 7th round selection of the Los Angeles Dodgers in the 1977 Amateur Draft, Mitchell played 202 games over four seasons in the major leagues for the Dodgers and the Minnesota Twins. Mitchell was a member of the 1981 World Championship team and becomes the fifth Manager in franchise history to have played in the major leagues.

“I am honored to be a member of the most prestigious and successful organization in professional sports,” said Mitchell. “I grew up a huge Yankee fan, so it is truly a dream come true for me. I enjoyed my visits to Trenton as a coordinator when they were an affiliate of the Boston Red Sox and look forward to a successful season as the Trenton Thunder Manager.”

Since his retirement from playing in 1986, Mitchell has served as an Outfield, Base Running & Bunting Coordinator for the Atlanta Braves, Los Angeles Angels, Boston Red Sox, San Diego Padres and Montreal Expos.

Mitchell began his managerial career in 2006 with a two-year stint leading the Rancho Cucamonga Quakes (High-A, LAA). He then led the Angels’ Triple-A affiliate, the Salt Lake Bees, for three seasons. In 2008 he guided the Bees to a 24-2 record to begin the season en route to a division championship and the second-best overall record in the Pacific Coast League with an 84-60 mark. Mitchell moved back into a roving role for the 2011 season with the Angels before beginning a two-year stint as a Manager with the Chicago Cubs’ Rookie League affiliate in the Arizona League. He led the 2012 AZL Cubs to the playoffs with a 37-19 record, the third time in his managerial career that his team advanced to postseason play.

Joining Mitchell on the coaching staff will be Hitting Coach P.J. Pilittere, Pitching Coach Jose Rosado, Defensive Coach Justin Tordi and Bullpen Coach JD Closser. Athletic Trainer Lee Meyer will also return to the Thunder for a third season and the team’s Strength Coach will be announced at a later date.

Hitting Coach P.J. Pilittere returns for a second season with the Thunder and fifth overall as a coach in the Yankees system. In 2015, he oversaw a Thunder offense that included a trio of future major leaguers, Greg Bird, Gary Sanchez and Mason Williams as well as top prospects Aaron Judge and Eric Jagielo. Pilittere was a 13th round selection of the Yankees in 2004 and went on to play in 470 minor league games where he hit .264 with 77 doubles, 16 HR and 183 RBI. P.J. was a catcher for the Thunder during the 2007, 2008 and 2009 seasons where he helped the Thunder win their first two Eastern League Championships in ’07 and ’08.

Jose Rosado also returns for a second season as Pitching Coach with the Thunder. Prior to his stint in Trenton, Rosado spent four seasons with the Gulf Coast Yankees as a pitching coach. He spent five seasons as a pitcher with the Kansas City Royals where he went 37-45 with a 4.25 ERA in 125 games. Originally a 12th round selection in the 1994 First-Year Player Draft, Rosado was named to the 1999 All Star Game in Boston as the Royals’ lone representative.

Defensive Coach Justin Tordi joins the Thunder after serving in the same position with the Scranton Wilkes-Barre RailRiders in 2015. Tordi was selected by the Cincinnati Reds in the 41st round of the 2005 draft out of the University of Florida. He earned second-team All-SEC honors in 2005 while playing shortstop for the national runner-up Gators. He played four seasons in the Reds’ minor league system reaching double-A in 2008 and 2009.

JD Closser was named Bullpen Coach for the Thunder after serving as a coach for the Tampa Yankees (High-A) in 2015. A former major league catcher for the Colorado Rockies, Closser completed a 13-year playing career in 2011. Closser appeared in 160 games for the Rockies across the 2004, 2005 and 2006 seasons. He batted .239 with 10 HR and 48 RBI in his major league career.

Athletic Trainer Lee Meyer returns to the Thunder staff for a third season in 2016. Prior to his time in Trenton, Meyer spent two seasons with the Tampa Yankees and one season each with Charleston and Staton Island.

The Thunder, Double-A Affiliate of the New York Yankees, play in the 12 team Eastern League.  The Thunder have drawn over 8.8 million fans to ARM & HAMMER Park over 22 years and have won the three major awards that Minor League Baseball teams can win; the Johnson Trophy for the “Nation’s Best Franchise” (2005), the Larry MacPhail Trophy for Outstanding Club Promotion (2003) and the Bob Frietas Award for Long-Term Success (1998, given by Baseball America).  The team has given back over $5.7 million worth of goods, services and monetary donations through Trenton Thunder Charities, under the Grand Slam We Care Foundation umbrella. The Thunder can be found online at trentonthunder.com, facebook.com/trentonthunder, twitter.com/trentonthunder and on youtube.com/AATrentonThunder.