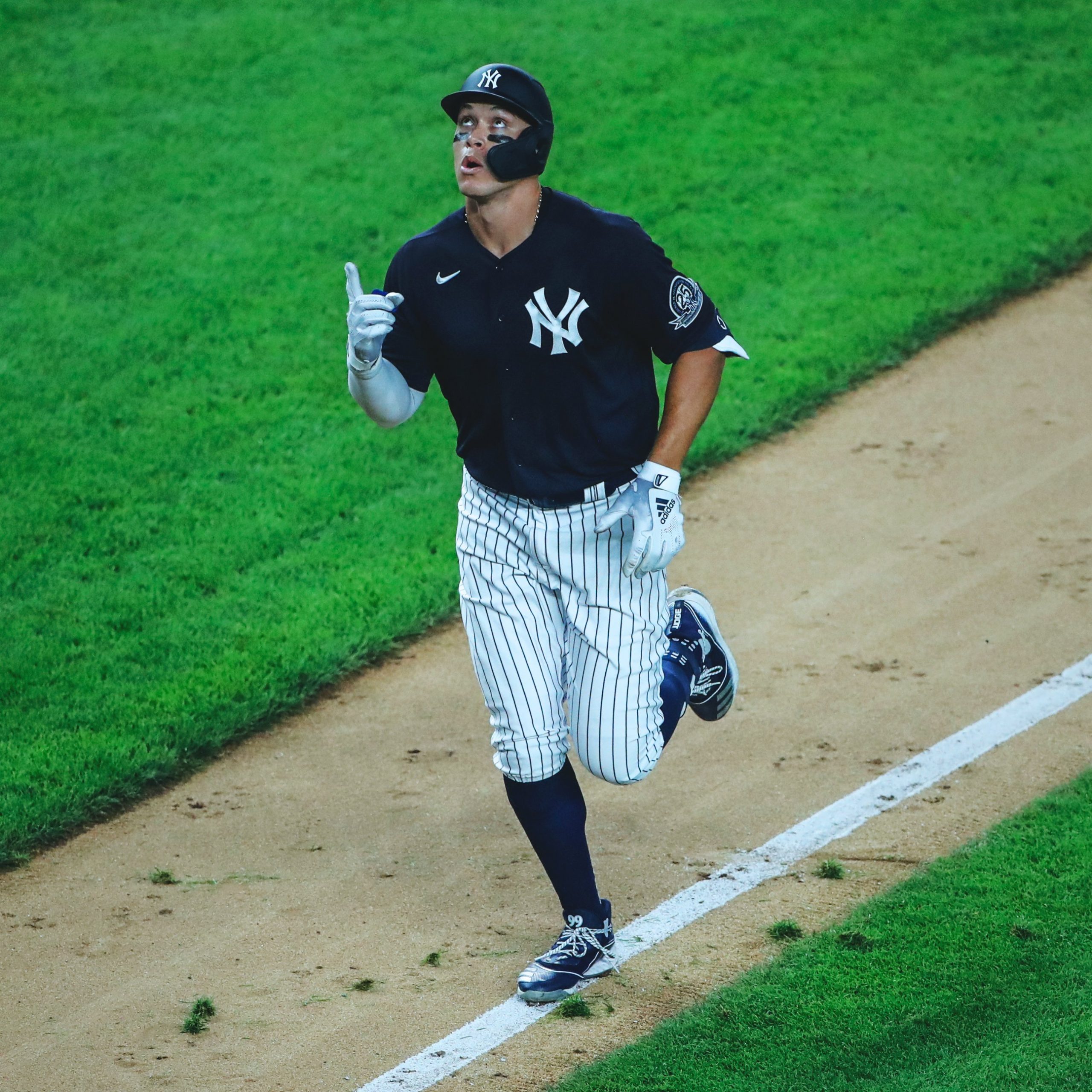 It was a home run derby for the Bronx Bombers as the New York Yankees defeated the New York Mets in shutout fashion in their second exhibition game of Summer Camp 2020 by a score of 6-0, launching a total of five home runs tonight. Jordan Montgomery (1-1) was the winning pitcher, and Corey Owsalt (0-2) took the loss.

Montgomery was absolutely dominant tonight for the Yankees. He threw just 59 pitches. Montgomery gave up just two hits and one walk, recording six strikeouts over the course of five scoreless innings pitched for the Yankees.

Montgomery met with the media following his outing tonight and stated that he was really trying to pound the zone and change speeds, which he feels helped him find timing and rhythm on the mound. “I was trying to execute as many pitches as I could,” stated Montgomery.

Montgomery stated that he feels game-ready and ready for the regular season, stating his timing was good tonight and that he executed a lot of pitches the way he wanted to. He got a lot of weak contact off the bats of a strong New York Mets lineup and expanded the zone when he needed to as well. Montgomery stating that tonight finally felt a truly real game facing another team. “I was excited to get out there with our guys behind me and compete,” stated Montgomery.

When asked, what feels different about his delivery before and after having Tommy John Surgery, Montgomery stated that everything feels different (and better), including his arm speed, conviction, strength, and his arm patch is more efficient. Montgomery stating, “I feel really good about where I’m at, I’m only going to get stronger with the more pitches I throw.”

Montgomery’s next start will be in the regular season. He stated he is excited for that next step and feels like he’s worked as hard as he could during the shutdown of everyone going home and put himself in the best position he could. “I’m excited to compete with the guys,” stated Montgomery, who noted that he was excited to get back to pitching in the Spring and still has that same excitement this summer. He reiterated that he was really excited tonight and is ready to get out there with his team.

Manager Aaron Boone spoke tonight on Jordan Montgomery’s performance, stating that Montgomery confirmed tonight that for as good as he was in Spring and how good he’s been so far here in Summer Camp, that he put it all together tonight throughout his whole outing. “You saw everything and that’s a good (Mets) lineup over there. Boone spoke on Montgomery’s ability to pitch with his fastball, his cut-fastball, changeup, and curveball, stating that he made a number of really quality pitches that caused swings and misses, and some very weak contact from a strong lineup. Boone stated that Montgomery made a couple flat pitches, but overall writed the ship right away and had a really efficient five innings. From a pitching standpoint, Boone wanted to get Loaisiga and Holder in tonight as well, so Montgomery was pulled before even hitting his pitch count. Boone stated that Montgomery finished his outing with a bullpen session to drive his pitch count up. “I’m really proud of Monty with where he’s at,” stated Boone. “He clearly continued to work during the break and put himself in a great spot coming out of the break and into camp.” Boone stated that training and training wisely becomes very important after an injury, especially Tommy John surgery and he noted that Montgomery knows how to put himself in a position now to continue to grow in his physical development. Boone stated that sometimes it takes an injury to make sure you’re doing everything necessary.

Jonathan Loaisiga followed behind Montgomery, throwing 39 pitches. He gave up just one hit and recorded one strikeout over the course of three scoreless innings.

Jonathan Holder finished out the game for the Yankees, pitching one scoreless inning. He did not give up any hits and recorded two strikeouts in his one inning pitched tonight.

In total, the Yankees have outscored the Mets 15-3 in the Summer Camp Exhibition Subway Series. Any worries that the Yankees’ hitters are behind pitchers is no longer a worry as the Yankees offense proved that they are alive and well.

Montgomery spoke on the way his offense performed to back him up tonight. He stated, “Our lineup is really good. All three of them (Judge, Stanton, Sanchez) seeing the ball the way they are gives you a lot of conviction to be able to pound the zone and be aggressive and know your guys are going to put up runs for you,” stated Montgomery.

Aaron Boone stated that seeing the offense do what they did tonight confirms what the coaching staff has been seeing from the start of summer camp, guys are in shape and have been chomping at the bit to get out there and get the season started. “They’ve taken intrasquad games and all the live reps as very important things,” stated Boone. He said this first chance to play other teams, they’ve seen a lot of good at bats from guys and it was good to see that again tonight, Boone said.

Boone also spoke on Aaron Judge and whether he’s 100 percent after his neck kink/injury he was dealing with, and Boone stated that he assumes (since not asking him the past couple days) that he is 100 percent or very close. “His energy and being able to hit in camp confirmed in his mind that he’s healthy,” stated Boone. Boone reiterated that Judge has put in a lot of work during Summer Camp, including taking extra at-bats, hitting off the machine, and has put himself in a really good spot. “He’s ready and on a mission to go out and dominate,” stated Boone. “Ramp up has gone really well for him and we’ve seen that in typical Aaron Judge at bats,” stated Boone.

When asked if this puts the Rib Injury concerns at rest, Boone stated that it hasn’t been a concern during Summer Camp and that he has been confident that Judge was going to be healthy this season. Boone stated that the time away had served Judge well and allowed him and the training staff to build up a smart build up schedule.

DJ LeMaheiu was also back in the lineup tonight, playing two innings and getting two at-bats. Boone stated that he looked good. He smoked the ball on his first at-bat and looked like typical DJ, according to Boone. Boone stated he saw no sluggishness from LeMaheiu and was happy with what he saw for his first time getting live at bats since joining the team in camp.

The Yankees (13-8-2) close out Summer Camp play with an exhibition game tomorrow night against the Philadelphia Phillies (15-6-1) at 6:05 PM at Yankee Stadium. The game will be broadcast on YES Netowrk. The Yankees will be welcoming back former Manager, Joe Girardi, as well as former Teammate, DiDi Gregorious, who it has been confirmed will be on the trip tomorrow as well.