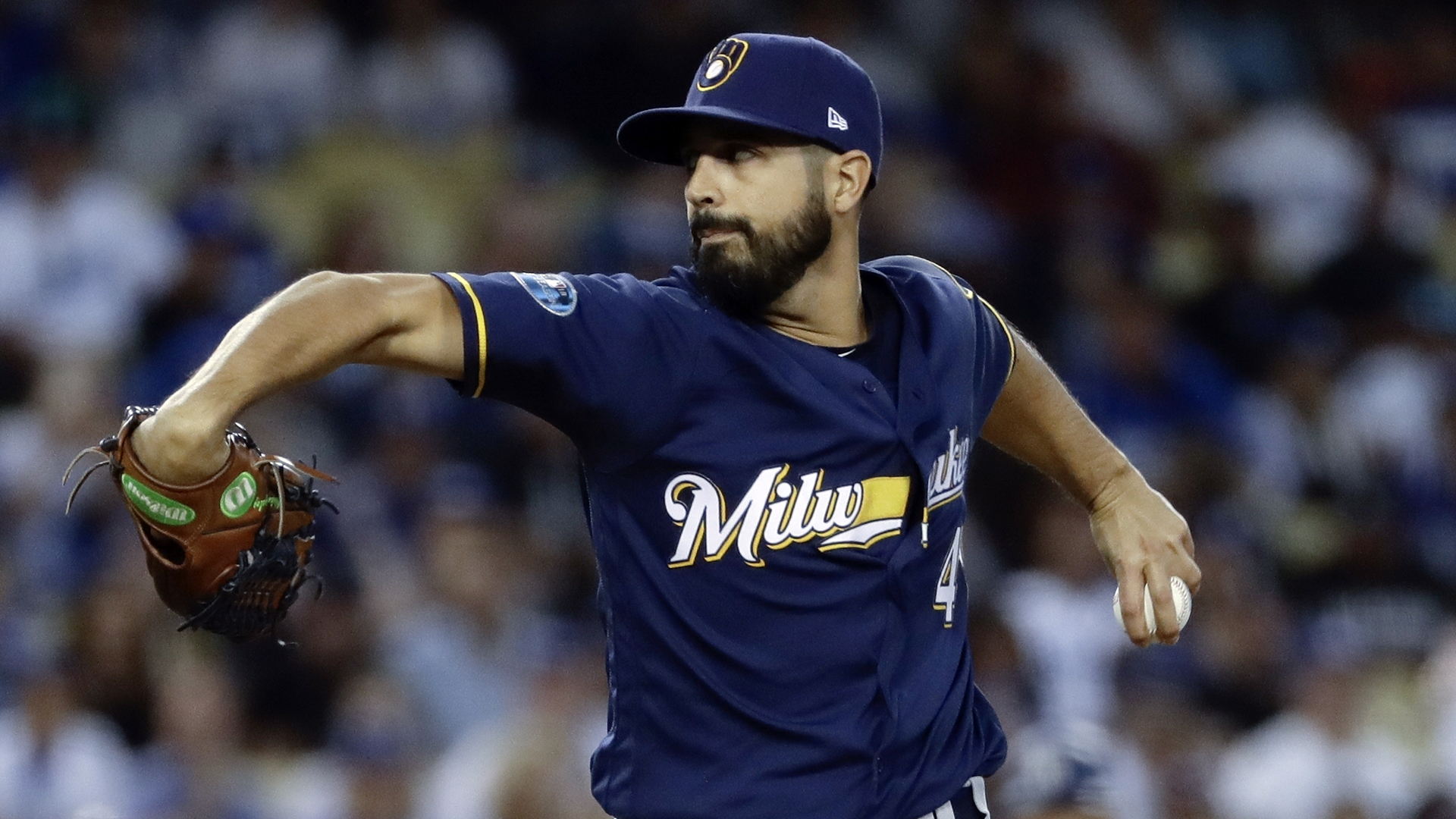 FILE - In this Oct. 16, 2018, file photo, Milwaukee Brewers starting pitcher Gio Gonzalez throws during the first inning of Game 4 of the National League Championship Series baseball game against the Los Angeles Dodgers in Los Angeles. A person familiar with the negotiations tells The Associated Press that left-hander Gonzalez and the New York Yankees have agreed to a minor league contract. The person spoke on condition of anonymity Monday, March 18, 2019, because the agreement had not yet been announced. (AP Photo/Matt Slocum, File)

The New York Yankees reportedly signed free-agent left-handed starting pitcher Gio Gonzalez to a minor league deal, according to Buster Olney of ESPN. If Gonzalez makes the major league roster he will make $3 million with incentives. He can opt-out if he is not on the MLB roster by April 20. From a Yankees perspective, this low offer makes sense. If he shows good stuff in the early stages and gets a call-up he could become a legitimate member of the rotation in the first half. When MLB Trade Rumors released their contract projections for the top-50 free agents, they had Gio Gonzalez getting two years $24MM from the Oakland Athletics. Not only is this a steal for the Yankees, but it also goes to show how messed up the free-agent market in baseball has become. 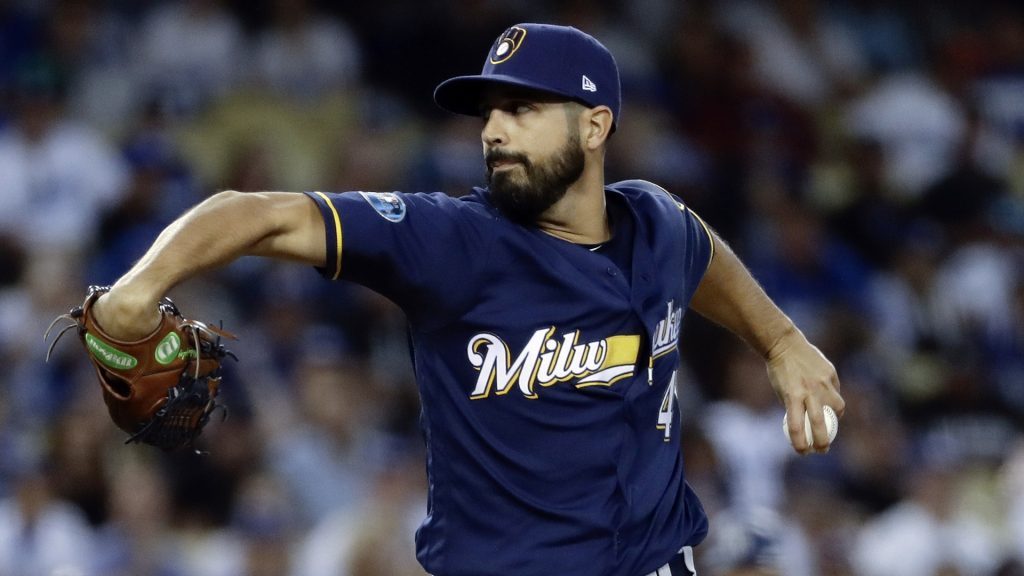 FILE – In this Oct. 16, 2018, file photo, Milwaukee Brewers starting pitcher Gio Gonzalez throws during the first inning of Game 4 of the National League Championship Series baseball game against the Los Angeles Dodgers in Los Angeles. A person familiar with the negotiations tells The Associated Press that left-hander Gonzalez and the New York Yankees have agreed to a minor league contract. The person spoke on condition of anonymity Monday, March 18, 2019, because the agreement had not yet been announced. (AP Photo/Matt Slocum, File)

Why it Makes Sense

The case can be made that the Yankees have a need for Gonzalez in the rotation. It stems from the fact that Luis Severino, who was slated to open the season as the ace, is now out until at least May first. Beyond that, C.C Sabathia will be recovering from heart surgery. Jonathan Loaisiga and Domingo German, the replacements, are fresh off of injuries to their throwing arms. Thus, at this right price point, Gio could act as a depth piece should anything go wrong in terms of further injuries to the rotation. Gonzalez could also still become a productive member of the rotation after some time.

At least in comparing 2017 to 2018, there are not any significant changes in his pitch velocity. His swing and miss percentage on his curveball dropped three percent but increased by seven percent on his fastball. Gio also changed the way he pitched last season by increasing sinker and changeup usage and decreasing fastball and curveball usage. He has maintained a high ground ball rate and is a season removed from a 200 inning season in which he recorded a 2.96 ERA. Without a doubt, he got plenty of help from his defense that season as he sported a .258 BABIP, but if the Yankees trust their defense then the addition could pay off.

Gio in Comparison to German

Any case for not signing Gonzalez was evident in the fact that he is a 33-year-old historically erratic lefty, and the Yankees might just be better off using their deep bullpen to employ an opener once or twice a week. That, or inputting Loaisiga and German. Filling a 25-man spot with Gonzalez could be a waste, especially if he continues to age and get worse. His strikeout rate dipped below 20% while his walk rate went above 10% in 2018. He is a pitcher that heavily relies on a good defense to be a sub-4.00 ERA pitcher, something that the Yankees struggle with. That infield defense won’t be made any better by the early absence of Didi Gregorius.

Gio in Comparison to Loaisiga

There is a reason, then, why the Yankees were bearish on adding Gonzalez. It’s because German might just have a better season than him for a fraction of the price. The same can be said about Jonathan Loaisiga. Loaisiga was in the 89th percentile in fastball velocity in 2018 and was in the 74th percentile in fastball spin. He is projected to have a solid 2019 season according to FanGraphs’ Steamer. It has him only throwing 69.0 innings but recording a 3.97 ERA with a 12.04 K/9 and a 45% ground ball rate. The real concern for Loaisiga comes from his injury history. Putting that aside, nonetheless, we see another pitcher with plenty of upside that could provide the team with more than Gio may provide.

It All Makes Sense

I can’t imagine that the Yankees’ offer to Gonzalez blew his socks off. They likely had a very strict price point for him and would only add him if he accepted it. If not, the Yankees wouldn’t have blinked. They know that they have internal options that can have potentially better seasons. The projections across the board between Loaisiga, German, and Gio are so similar. I would probably take the under on the German’s projected 4.31 ERA.  I would certainly take it over Gio’s 4.40 projected ERA if I had to bet. Nonetheless, the Yankees got Gio at a low price point and he will be given the opportunity to make his $3 million dollars if he shows he can contribute positively.