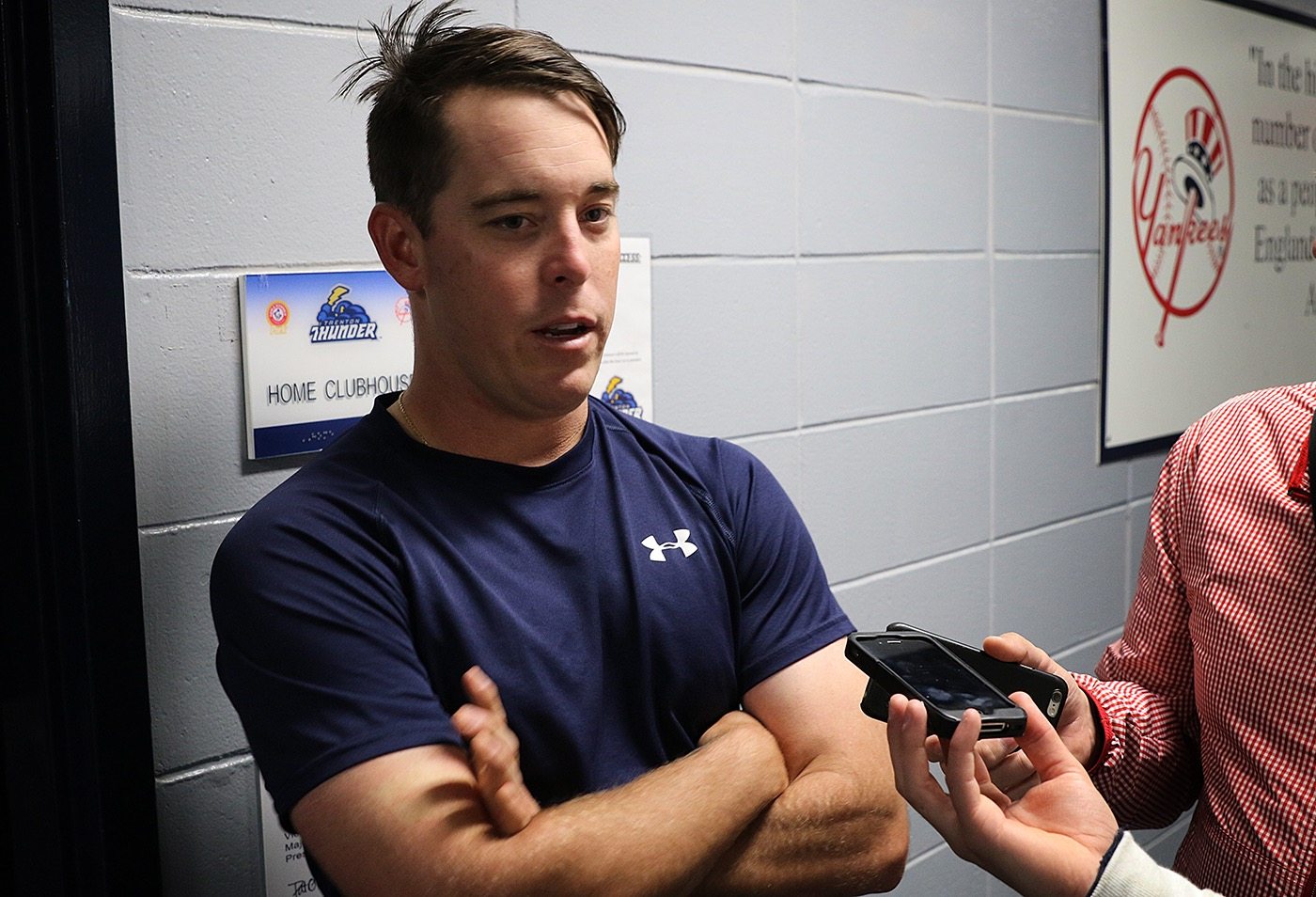 J.R.Graham picked up the win in the RailRiders' final regular-season game. (Photo by Martin Griff)

TRENTON, NJ – Right-handed reliever J.R. Graham, the newest member of the Trenton Thunder bullpen, did not pitch in Sunday’s 7-2 loss to the Reading Phillies at ARM&HAMMER Park.

When he does take the mound, likely in the upcoming series with the Richmond Flying Squirrels opening Tuesday night, fans will notice he is wearing old-style high stirrups. There is a special reason for this.

J,R.’s mom, Julie Graham, was born with Best Disease, a rare retina disorder that has caused her vision to deteriorate and left her legally blind. She can tell there are players on the field, but she can’t distinguish details. She can see better out of her periphery than straight ahead. That means she sometimes has trouble picking out J.R. He wears the stirrups – and wore white cleats as far back as Little League in Livermore, Calif..

So if his parents are in the stands to watch their 26-year-old son perform, fans will also see his special recognition signal to his mom.

The Yankees, in acquiring Graham, who put together a 1-1, 4,95 mark in 39 appearances (1 start) with the Twins in 2015 after Minnesota selected him in the Rule 5 Draft, are hoping a pitcher, who signed with Atlanta out of Santa Clara University after being taken in the fourth round in 2011 can become a valuable bullpen piece.

“I saw him in the Atlanta system,” said a scout from a National League team about Graham. “I liked both his pitching mix and his approach.”

So did the Twins until things went awry early this season. He was 0-1, 10.80 in his only appearance with the Twins, and 0-2, 10.80 in eight appearances with Triple-A Rochester before being DFA May 6. The Yankees signed him May 14.

“A lot of things just kind of didn’t feel right,” said Graham, “A lot of stuff wasn’t coming out right. It (my command) would come back, then I couldn’t find it. I look at this as a chance to get back on track.”

Graham has no issue whatsoever with how things went with the Twins, and is certainly pleased to get a shot in the Yankees system.

Graham takes three pitches too the mound, a fastball that has touched 96-97, a hard slider and a splitter. He has used them to record a 302-112 strike/out walk ratio in 6 six minor- and major-league seasons. Like any other reliever, he is at his best when he is hitting his spots.

“I know, if I throw the ball over the plate, and they don’t hit it, like any other pitcher, I will be successful. It’s common thing with pitchers,” Graham said, flashing a grin.

Graham did shed a lot of weight over the winter, in fact dropping from 210 pounds to 170.

“I really didn’t feel all that good after last season, so I made a conscious effort to eat better,” he said. “Maybe I took off a little too much, but the weight loss didn’t affect my velocity or my performance.’

He knows, with his experience, five or six strong performances will earn a promotion to Triple-A Scranton/Wilkes-Barre and a chance to face his former Rochester teammates.

“At these levels, you are only a phone call away,” said Graham. “The fun part about baseball is you never know what will happen from year to year.”

Graham got to know both former Yankees starter Phil Hughes during his time with the Twins, and is familiar with Thunder manager Bobby Mitchell from the time the Trenton skipper worked in the Atlanta system.

“Phil is a great guy, and he really gave me sone good insights into hitters,” he said. “And I certainly remember Bobby from when I played in the Braves system. He’s a good man.”

The Yankees are hoping Graham, who has all the tools to be a dominant late-inning reliever, gets himself back on track, They are just the latest team to see his potential.