Yankees Take the Series from the Nationals 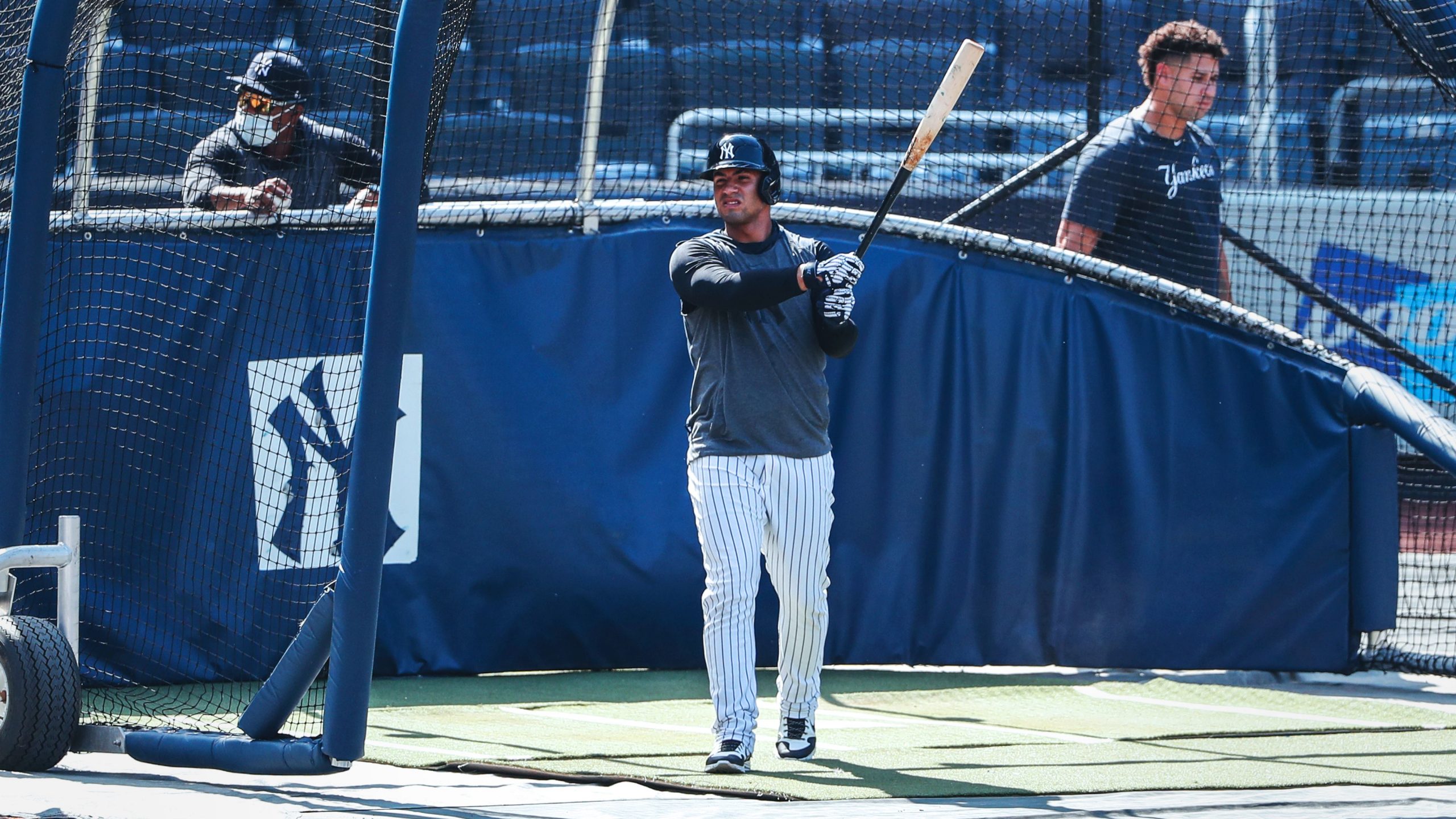 The New York Yankees defeated the Washington Nationals in game three of the series by a score of 3-2 to take a 2-1 series win at Nationals Park in Washington.

The Yankees, on a bullpen day, used six pitchers. Jonathan Loaisiga got the start for the Yankees, going three innings pitched, giving up two hits, one earned run, one walk, and one home run. Loaisiga struck out three.

Aaron Boone spoke with the media after the game and stated that Loaisiga looked really good and was on the attack this afternoon. He was filling up the strike zone, stated Boone, and managed his pitch count after the first at-bat and got a few big strikeouts. Boone stating that Loaisiga managed his changeup well today and that going three innings, giving up just one run is something he was happy with getting out of Loaisiga. “He’s got elite stuff that can go through a lineup, right or left,” stated Boone. “When he’s on his game, he can go through any lineup.”

Loaisiga spoke with the media this afternoon. He was asked about how he was able to settle in after working so hard and long in the first inning, particularly the twelve-pitch at-bat to Trea Turner. Loaisiga stating he never lost concentration and that he was able to stay focused, execute, and get Turner out.

Adam Ottavino replaced David Hale, he went one winning and gave up just one hit.

Chad Green replaced Hale. He went two innings and gave up just one walk, no hits, and no runs. He struck out two and earned his first win of the season as the Yankees’ pitcher of record and getting the win today. 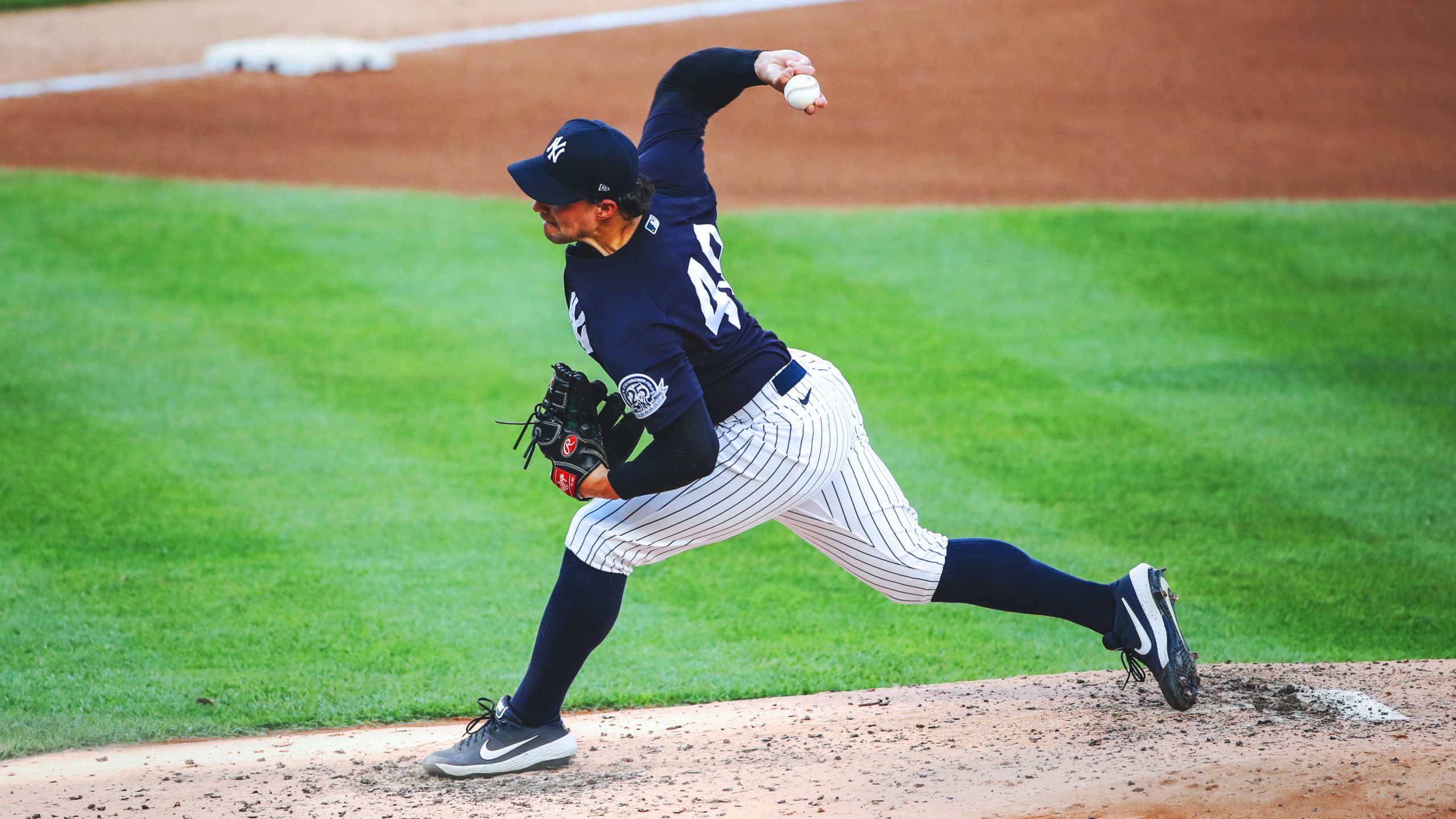 Tommy Kahnle replaced Green. He went one inning and gave up just one hit and one walk. He struck out three this afternoon.

Kahnle got into a tough spot during the game, facing bases loaded in the eighth. Kahnle stating that he was just trying to get the strikeout and knew his changeup had been going well so he stuck with it and got the out. He stated it felt like a high-pressure situation with high stakes at hand and that even without fans in the stands.

Boone stated in his press conference that Kahnle kept making really good pitches against good hitters this afternoon. Boone stating he threw the ball really well this afternoon and is throwing it really well right now. Boone saying Kahnle’s fastball played a little better today and that his changeup looked really special today as well. Boone said coming into Summer Camp, Kahnle’s velocity was way up compared to Spring Training and that from summer camp on his stuff has ‘jumped off the screen.’

Zach Britton came in and closed the game for the Yankees, going one inning and giving up just one walk. Britton earned his first save of the season.

Britton met with the media this afternoon, stating he had a lot of adrenaline coming into this afternoon’s game and that with the extra adrenaline and being a little too amped up, that he overthrew a little, but that it felt more like a regular-season game. Britton stating it was good to get his first one under his belt and get the save and for the team to get the win.

Britton stated that what made today feel more normal was coming in and trying to seal the win for the team and that he was pleased with the adrenaline he had coming in. Britton also stated that he kept the ball, but will eventually give it away since it’s not a milestone ball. 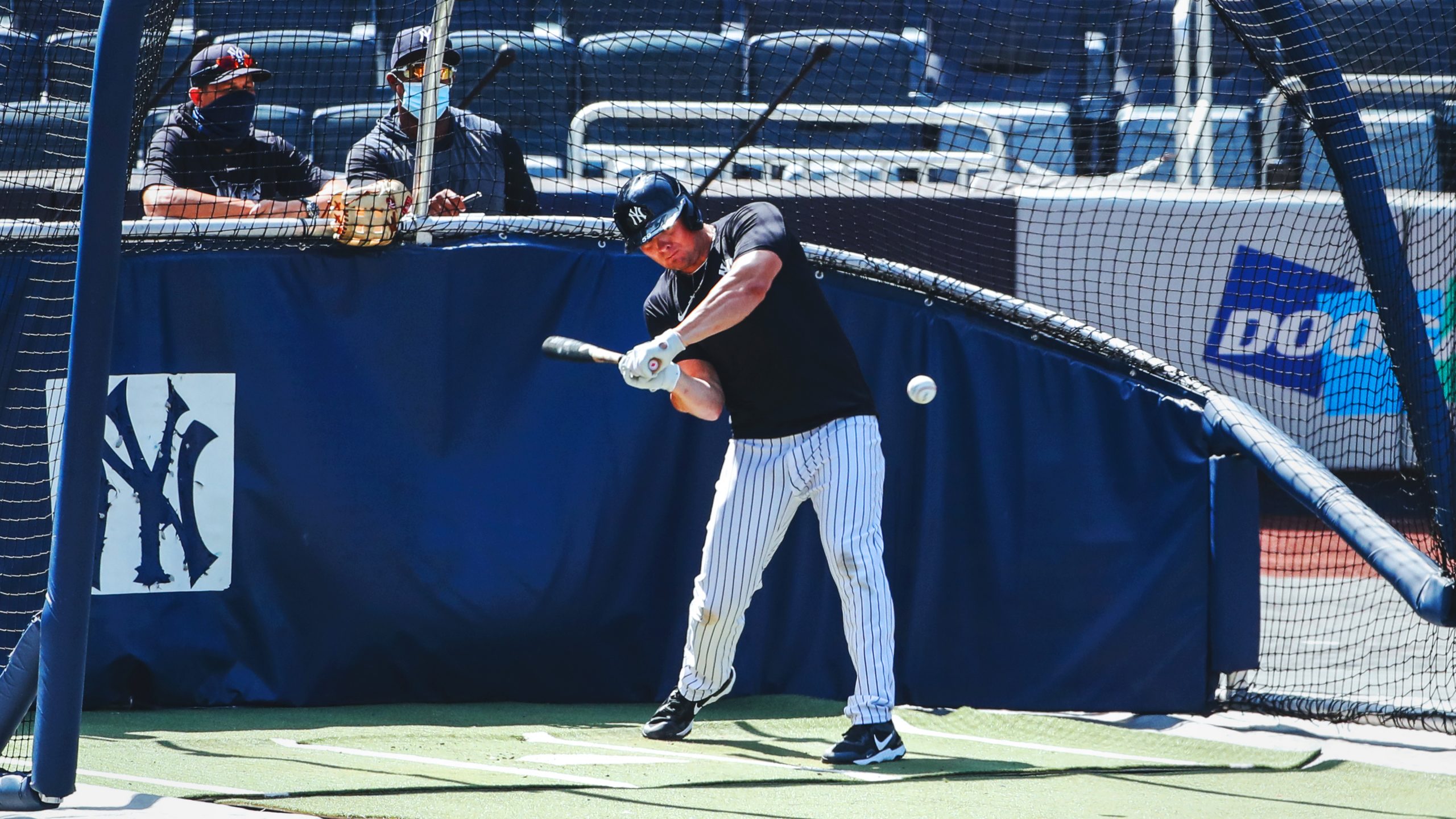 Torres, who had a strong offensive day, was three for four with two RBI’s in this afternoon’s game against the Nationals.

Boone stated after the game that Torres has been clicking now all of summer camp and said he hit a couple of balls on the screws the first couple games and is a really good player who got some balls to hit that allowed him to do some damage today. Boone stating it was good to see him set the tone for the game in the seventh.

Boone also spoke about Torres’ position in the lineup between Judge & Stanton, stating he wanted another one of the Yankees’ really good hitters getting up in that spot and that that is a spot where they want to keep the ball off the ground, which is something that Torres does well. “It’s his time and we like him up there,” stated Boone. “It’s about wanting to get him up in that first inning.”

Torres also had an error in the game today but stated that he’s a good player who just had to keep playing. Kahnle stating that after the error, he just tried to encourage Torres, telling him it will be alright and hoping he could get the ball in the next play and make a double play. 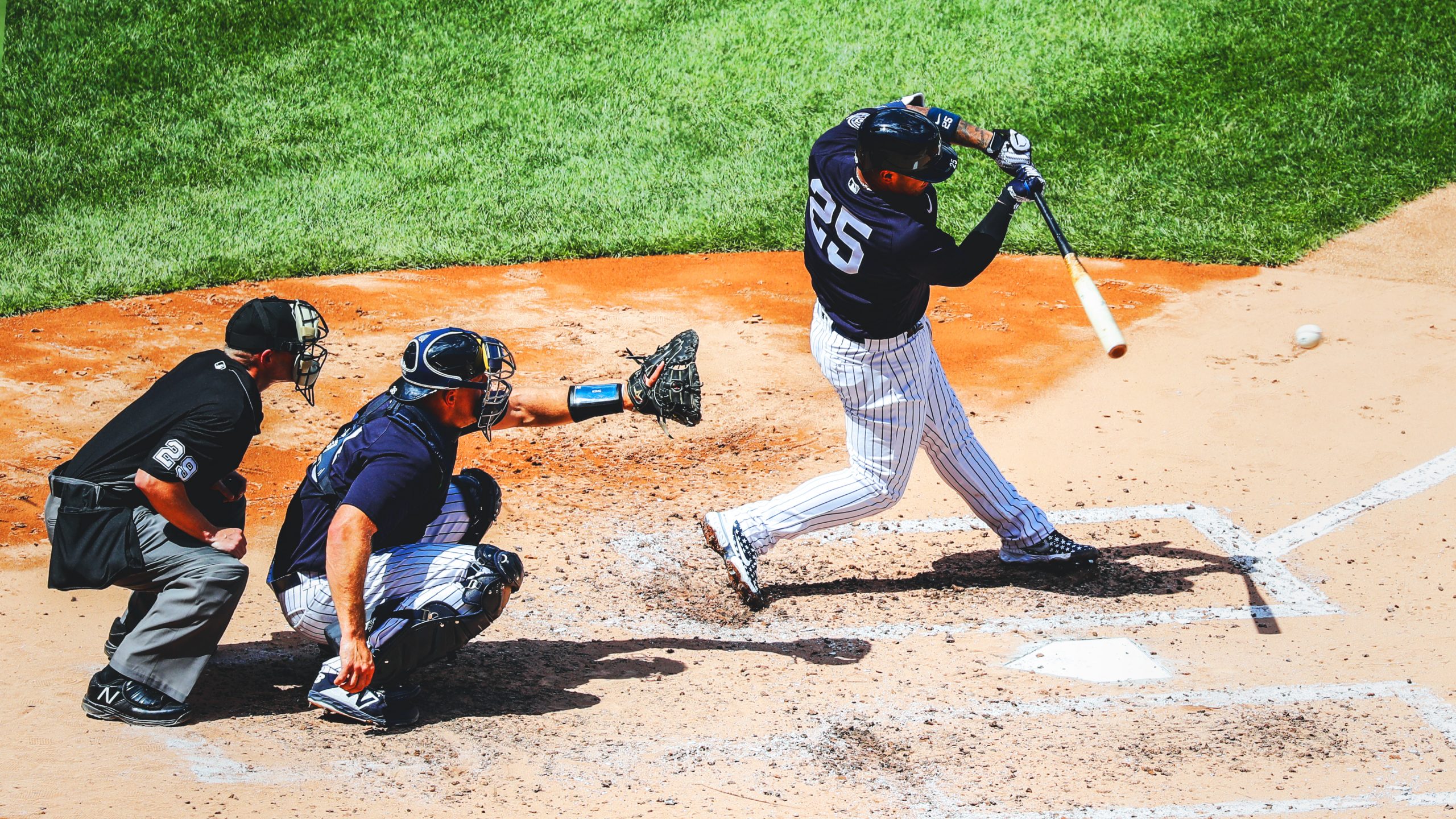 Gleyber Torres spoke with the media after the game. He was three out of the Yankees’ five hits. When asked what led to his success at the plate, Torres stated that after his first hit he felt more confident. He stated the first couple of games he felt too excited, but that he tried to do the same job he always has to do and made adjustments throughout the game.

Torres stating that tonight Patrick Corbin threw his breaking pitches really well and had really good command. Torres stating that each at-bat, the guys got to him better and tried to put the ball in play. Torres said Corbin’s slider was dominant and that when he got the fastball, he took advantage and did the damage with the seventh-inning home run.

Boone spoke on Corbin’s outing for the Nationals, stating that he was having his way with the Yankees for the most part and that the guys felt confident coming around the second time. “He pitched well against us, but we were able to outlast him and put together timely at-bats,” stated Boone.

Luke Voit also met with the media, stating that Corbin was dealing today and that it was great for Gleyber to come in and break out the way he did and to get Corbin out of the game so the Yankees could get going.

When asked if today felt any more normal, Voit stated that with it being a close game and guys yelling from the dugout, that it did feel more like an August/September game. Voit stated it was good to go on the road, get the series win and the first road trip wins of the season.

When asked if today’s game gave more of a sense of urgency with a series-win on the line, Boone stated that they did empty the tank a bit today and he also credited his team for stringing together a lot of really good at-bats the second half of the game. He also credited key defensive plays, including the double play against Robles as having an impact on today’s game. Boone stating that a lot of guys had a hand in today’s ‘good solid victory.’

Boone closing out his press conference asking about a 2020 slogan for his batters, stating, “I always think our guys are savages, that will never go away.”

The Yankees will now head to Philadelphia with they will open a four-game home and home series against the Phillies. The first two games of the series will be in Philadelphia before the two teams head back to New York to complete the series at Yankee Stadium. The Yankees opening day will be Wednesday at 7:05 PM.