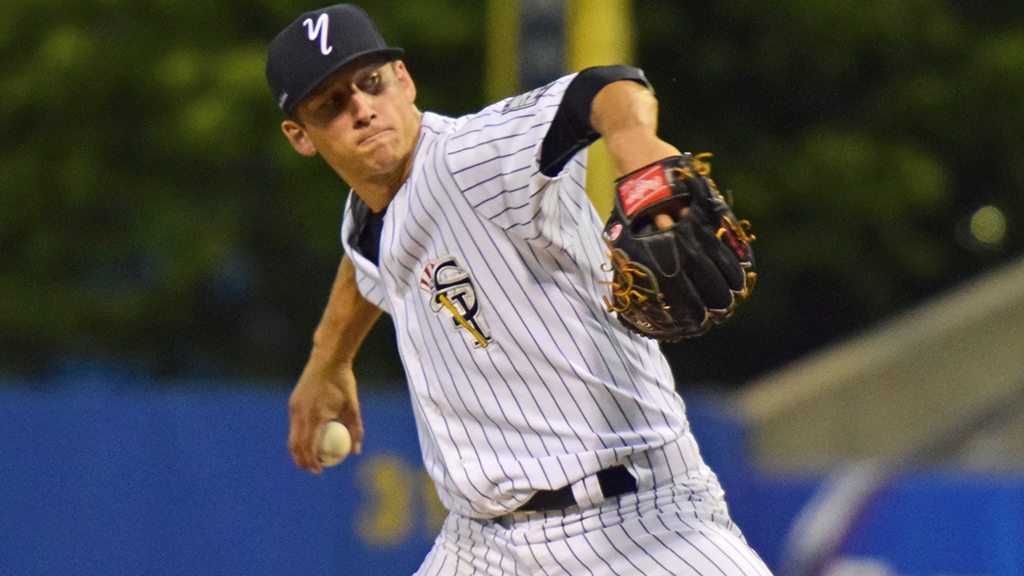 New York Yankees first round pick, 16th overall, James Kaprielian (Robert M Pimpsner/Pinstriped Prospects)
Drafted 16th overall in the first round of 2015 draft, pitcher James Kaprielian became the highest ranking selection by the New York Yankees since Matt Drews in 1993. Bypassing fellow hurlers Brady Aiken and Ashe Russell, the Yankees opted for one of the safest options in the entire class and one who is already considered the top pitching prospect in the organization after Luis Severino‘s ascension to the major leagues.

Coming out of Arnold O. Beckman High School in Irvine, California, Kaprielian was a revelation, going 33-3 with an ERA under 1 as an amateur. Spurning a chance to sign out of high school after being drafted in the 40th round by the Seattle Mariners in 2012, Kaprielian opted to attend UCLA and began one of the top pitchers in the nation averaging 106 innings in each of his final two collegiate seasons with a combined 17-10 record and a shared no-hitter with David Berg in his junior season, the first in school history.

After signing with the Yankees the week of the July 15th deadline, Kaprielian made his professional debut with the Gulf Coast Yankees in rookie ball at the end of the month, allowing three runs in two appearance as he looked to shake off the rust after being drafted. Kaprielian eventually found his rhythm after being promoted to the short-season Staten Island Yankees and progressively dominated with each successive start.

Although Kaprielian did not record any victories in his first professional season, he pitched to a 2 ERA in three regular season starts and averaged 12 strikeouts per 9 innings. Kaprielian’s efforts were instrumental in leading Staten Island to the McNamara Division title, saving his best in Game 2 of the New York-Penn League Championship, pitching a career-high 6.1 scoreless innings with 5 strikeouts with his team facing elimination. “I learned a lot,” Kaprielian said. “There is a plan for me. My job is to work hard, compete every day and stick to the process”.

At 6-foot-4 and 220 pounds, Kaprielian possesses ideal size for a power pitcher and has exceeded early expectations. Initially projected to have an average fastball by scouts out of the draft, Kaprielian reached 96 miles per hour with his four seamer according to radar gun readings in Staten Island and was most consistent when kept the pitch down in the strike zone.
Kaprielian admittedly said opposing hitters made better contact when he left the pitch at eye level though he shown a strong sense of making adjustments and the right pitches to escape tough jams. Kaprielian compliments his fastball with a changeup that might be his strongest offering and a plus changeup and curveball.
The ability to have above average command with each of his pitches has enabled Kaprielian to become one of the game’s best young pitching prospects and draws frequent comparisons to recently signed Kansas City Royals pitcher Ian Kennedy who was fast tracked to the big leagues when he was a member of the Yankees farm system.
While a major league debut at the end of the 2016 season seems optimistic, Kaprielian will likely move through the farm system quickly beginning at either Class-A Charleston or Tampa and may pitch at multiple levels before the year is complete and position himself for a possible promotion to the Bronx sometime in 2017.
Since drafting Kennedy out of USC in 2006, the Yankees have taken seven pitchers in the first round with Kaprielian having the best chance to make a significant impact in pinstripes.
In this article:baseball, James Kaprielian, milb, Minor League Baseball, mlb, New York, New York Yankees, Staten Island Yankees, Top Prospects, yankees