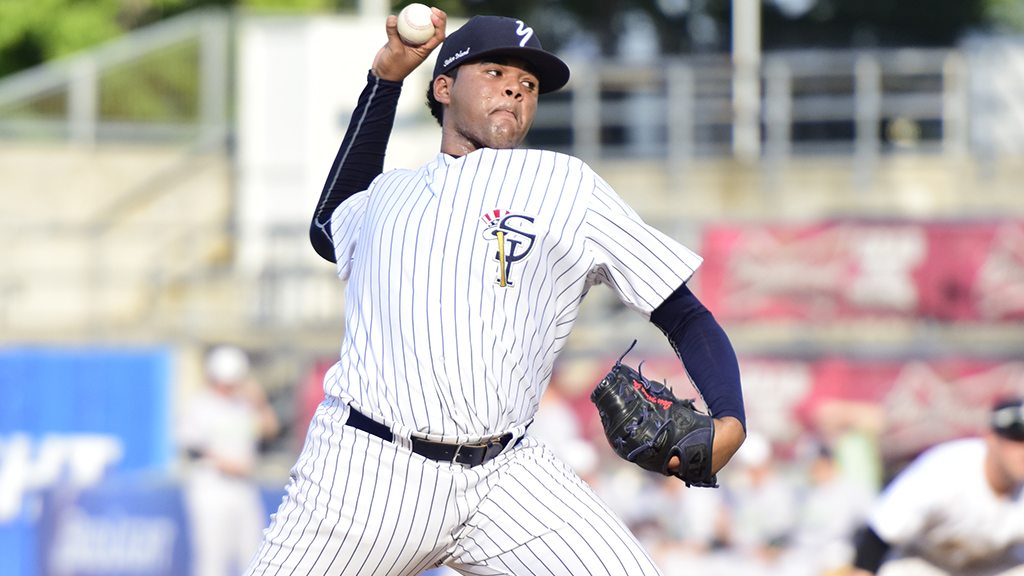 In the 24th round of the 2012 First-Year-Player Draft the New York Yankees selected right-handed pitcher, and son of former MLB closer Jose Mesa, Jose Mesa Jr. out of Charles Flanagan High School.   He went on to sign the Bronx Bombers but his professional debut was put on hold after needing Tommy John surgery.

On July 11, 2015 Jose earned a promotion to the Staten Island Yankees of the NY-Penn League where he impressed many as one of the best relievers on the team.  He earned himself a 3-0 record in his first taste of Class-A ball, appearing in 10 games and throwing 21 2/3 innings out of the bullpen.  During that time, he struck out 35 batters, walked 9 and allowed just 1 earned run.  That 1 earned run came on July 24 when he allowed a run to the West Virginia Black Bears who went on to win the league championship.

Mesa’s time was short with Staten Island as he earned another promotion on August 18, 2015.  This time it was to the Charleston RiverDogs of the South Atlantic League.  In the SAL he was touched for 5 earned runs over 5 games and 11 1/3 innings while striking out 17 batters and walking 7.  In total he threw 40 1/3 innings over 3 levels of the minor leagues.

It is entirely possible that fans could be seeing Jose in a starting role for one of the Yankees Class-A teams in 2016.  He currently throws 4 pitches and has shown the ability to pitch multiple innings, he threw 3 innings in 5 of his appearances in 2015.

Mesa’s top pitch is his fastball that sits 92-93 MPH and could add a few ticks as he is further removed from surgery.  Along with the heater he has a curveball, slider and changeup.  He possesses a good feel for his pitcher, enabling him to throw any of them with any count on the batters.

With a father who was once one of the top closers in baseball there is no doubt that Jose has the stuff to one day be a contributor in the major leagues.  The question would be when and in what role.  If he stays in the bullpen there is a good chance that he can climb the ladder fast, a move to the rotation would add some development time.  Either way fans should keep an eye on him as he develops in the minors.