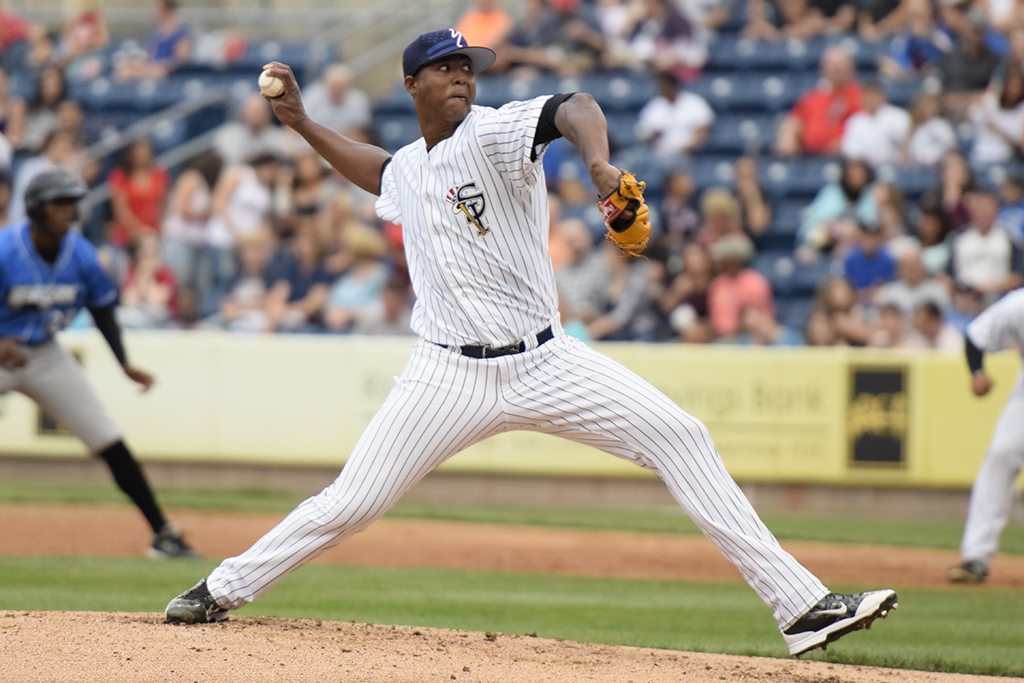 On March 3, 2013 the New York Yankees signed 18-year old right-handed pitcher Domingo Acevedo out of Villa Los Almacigos, Dominican Republic.  He was an older signing, not your typical international free agent as he only started playing baseball 2-years earlier when he was 16.

Later that year Domingo made his professional debut with the Dominican Summer League Yankees where he earned 1-2 record and a 2.63 ERA over 11 games, 10 starts.  He struck out 43 batters over 41 innings over work, walking 11 and hitting 2 batters.

Acevedo’s strong debut earned a spot state-side in 2014 when he joined the Gulf Coast Yankees roster.  With the GCL Yanks he pitched in just 5 games, throwing 15 1/3 innings while striking out 21 batters.  In the process he earned a 0-1 record with a 4.11 ERA and struck out just 6 batters.

His success earned him a spot on the roster of the Charleston RiverDogs to start the 2015 season but a nagging blister problem limited him to just 1 game for the Yankees full season affiliate where he threw 1 2/3 innings and allowed just 1 run and struck out 1 batter.  After being placed on the 7-day disabled list on April 20 he went back to Tampa to let the blisters heel and work his way back.

On June 19, 2015 Domingo was assigned to the Staten Island Yankees roster to continue his season.  On June 24 he made his debut for the Baby Bombers where he was touched for 2 runs over 3 1/3 innings of work, throwing just 64 pitches as he worked his way back from the blister issue.

Acevedo went on to throw 48 innings for Staten Island, striking out 53 batters while earning a 3-0 record and a 1.69 ERA in 11 games.  He made 1 appearance in the New York-Penn League playoffs against the Tri-City Valley Cats on September 10.  He allowed just 1 run in 6 innings, striking out 4 batters on 82 pitches

After the season Domingo went back to the Yankees complex in Tampa for the 2015 Florida Instructional League where he further impressed the Yankees evaluators.  They liked what they saw so much that the Yankees gave him a shot on the roster of the Surprise Saguaros of the Arizona Fall League where he would get a chance to face opponents of a higher caliber of what he faced in Staten Island.

Acevedo pitched exclusively out of the bullpen for Surprise in Arizona, throwing no more than 2 innings in an appearance.  He earned a 1-0 record with a 2.25 ERA over 12 innings, striking out 11 batters during the Fall League with 4 of them coming in his last game on November 16.

There is a lot to like about Domingo, he is a tall pitcher with a powerful fastball that has reached as high as 103 miles per hour during the 2015 season.  His second best pitch is his changeup which has been rated as a plus by some scouts who saw him throughout the season.  His third pitch is a slider that is still developing but has made tremendous progress since June.

Several fans and media members have commented that Acevedo might be a bullpen pitcher in the long run but the Yankees firmly believe he will be a starter.  He works better with a regular schedule and has made strides in repeating his delivery as the season went on.

Domingo has earned comparisons to Yankees right-handed pitcher Michael Pineda as the two share some similarities with their deliveries.

If the Yankees decide to keep him as a starter, he will likely head to the South Atlantic League in 2016 to become the ace of the Charleston RiverDogs pitching staff.