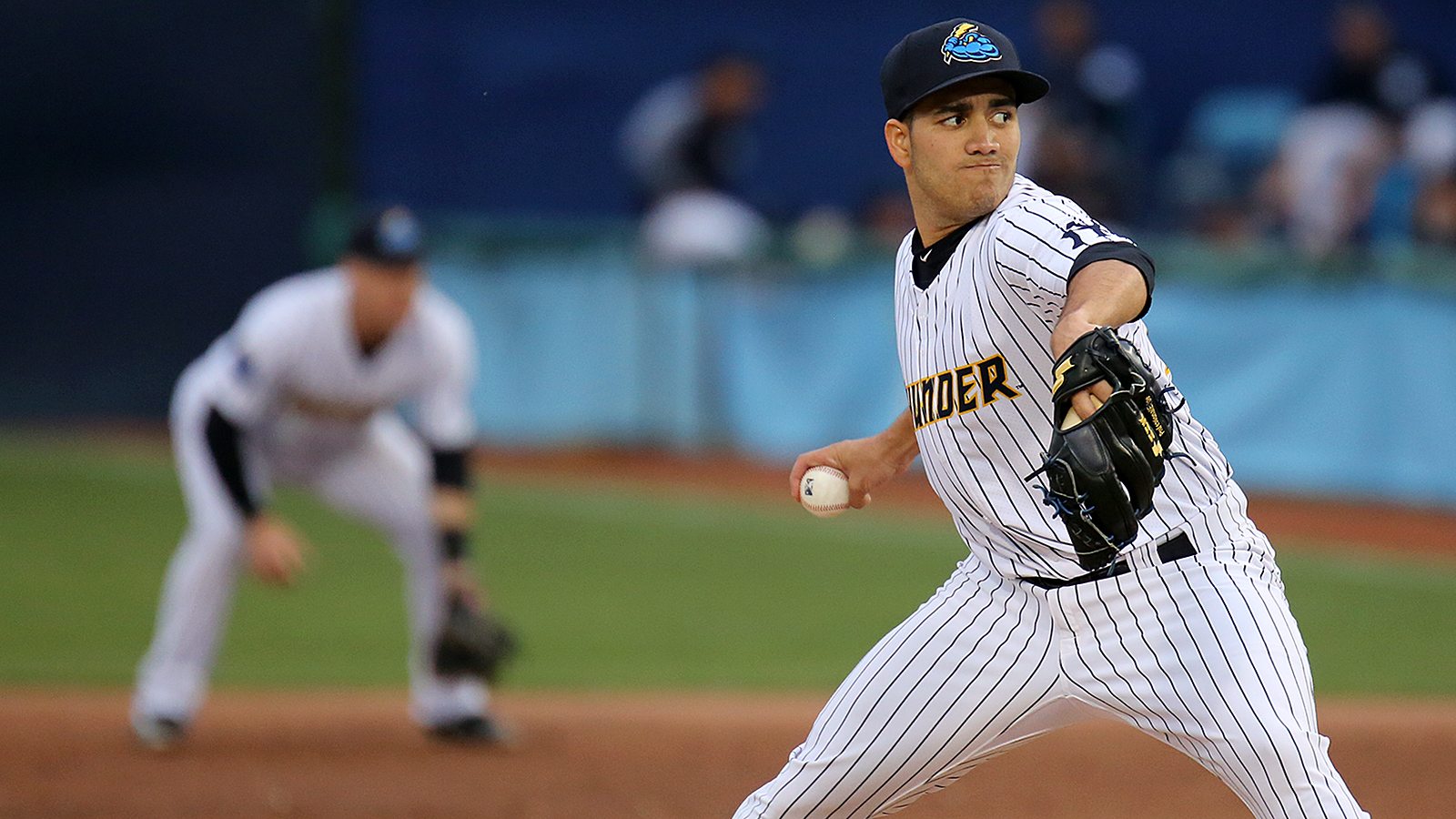 Trenton Thunder pitcher Ronald Herrera was added to the Yankees 40-man roster this past winter. Photo by Martin Griff

By 8 p.m ET tonight, the New York Yankees have to have their 40-man roster setup. They were able to clear an additional spot this afternoon as they dealt right-handed pitcher Ronald Herrera to the Texas Rangers for left-handed prospect Reiver Sanmartin.

Herrera made 14 starts in 2017 for the Yankees, and 13 of them came at Double-A Trenton and Triple-A Scranton Wilkes-Barre. During that time, he went 8-1 with a 1.89 ERA. He did up going on the disabled list on July 7 due to right shoulder inflammation. While he only had 57 strikeouts, it was the command of his pitches that jumped off the page as he walked just 15 batters.

In 2017, Herrera did make his big league debut on June 14 against the Los Angeles Angels. He went two innings, gave up two runs on two hits, and allowed Andrelton Simmons to hit a two-run home run in the bottom of the seventh.

Back in November 2015, the Yankees acquired Herrera from the San Diego Padres when they traded Jose Pirela. Since New York needs the roster space for some of their top prospects, this had to be a tough move to make as Herrera was excelling at the upper levels of the minor leagues.

As for Sanmartin, the 21-year-old was signed in July 2015 as an international free agent out of Columbia. This year, he pitched for Short-Season Spokane and Low-A Hickory. He went 7-2 with a 3.14 ERA in 14 games (11 starts). In 66 innings of work, he walked just nine batters while striking out 56.

Sanmartin only made seven starts with the Crawdads, but one thing that stands out is the number of hits he gave up. In 34.1 innings, he gave up 36 hits, and he gave up seven or more hits in three of those outings. Despite putting runners on base, however, he did allow more than two runs in a start twice.

When you look at both of these pitchers, they aren’t going to strike many hitters out. This season, Sanmartin didn’t strike out more than six batters in a game. With that being said, he did consistently throw 85-90 pitches in each of his outings, which is suitable for the Low-A level.

Over the last three days, the Yankees have added two left-handed arms into the mix in Sanmartin and JP Sears who could help down the road as they continue to progress in the system. Now, we wait to see what other deals Brian Cashman and company have in store today.